We’re going naval together with Play’n GO. Time to conquer skies and waters and establish total superiority. Cash Command is a slot for battle-hardened heroes, but even if you’re but a greenhorn, don’t worry, everyone can have their shine of brilliance in Cash of Command. We step into the shoes of an admiral, strategizing our next move, hoping for the most fruitful results. There are many talented enemy generals, that will stand against you, so show them, that you what it takes to be the best.

Cash of Command doesn’t strike us as a slot that was quickly cooked up, just for the sake of publishing new content. It seems well though over with a lot of brilliant game art. The game layout is certainly one of the largest that we have seen. Even a game like Reactoonz came with a smaller size. The 9x9 layout with the admiral theme reminds us of the famous Battleship guessing game. Perhaps, that’s the aesthetics that Play’n GO were trying to pull off. War is a touchy subject these days, but Play’n GO have managed to portray this game in a nice lighthearted way. 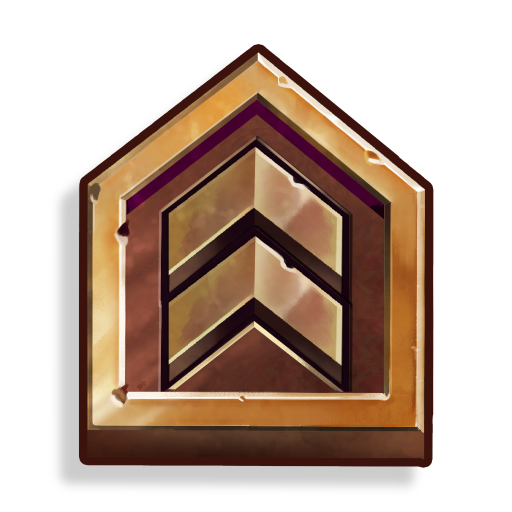 Considering the nature of war, Cash of Command is a surprisingly peaceful slot. You can hear the splashing waves and seagulls, and there is no intense battle soundtrack. The action takes place on a coastline and the game looks great, even though there is not that much going on on the screen. Like it is on the majority of cluster slots, symbols are small, in this case, they are various gemstones and badges. To produce any win, you need to match at least 5 symbols in a cluster. Anything above 50 awards the max symbol value.

Cluster slots are usually full of action, which is the case with Cash of Command. Symbols combine and drop all the time. Sure, the wins may not always be grand, but it is engaging and certainly far from boring. By nature, Cash of Command is highly volatile and the RTP is 96.28%. Mind you, that’s the best possible default RTP, so keep in mind, that some operators may op for lower variants, with the lowest one being 84.23%. The max win on Cash of Command is 5,336x, so a decent potential all things considered.

On both sides of the layout, you will spot two turrets. These are called the Baron’s Turrets and they can activate on any non-winning spin. These turrets fire away, removing some symbols and replacing them with Wilds. These Wilds, of course, substitute all symbols, so you have a wonderful chance to score a win with the remaining ones.

The main addition to the Cash of Command slot is the Naval Heroes feature. Each winning combination adds to the meter on the left side. By reaching certain levels, you will be awarded with the corresponding multiplier, much like it is on other popular Play’n GO cluster slots: 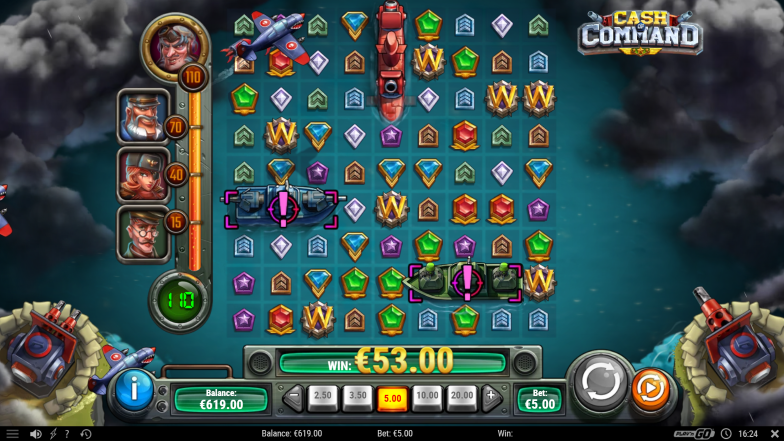 Cash of Command is bubbling with action. If you’re a fan of Reactoonz, then there is a good chance that you will also enjoy playing Cash of Command. There is constantly some action, but it never feels overwhelming. When you start climbing the collection meter and when ships begin to appear, Cash of Command feels like a true naval strategy game. Of course, you don’t plan your positions or attacks, but overwatching the whole action feels empowering. Cash of Command is another strong addition to Play’n GO’s cluster slot portfolio.

What is the default RTP on Cash of Command?

Which other Play’n GO slots I can try out on SixSlots?

We recommend having a look at Cat Wilde and the Pyramid of Dead, Fat Frankies, Gigantoonz, and Tales of Asgard Freya’s Wedding.

What is the minimum bet on Cash of Command?

Move out the way lion, there is a new king of the jungle. Head deep into the jungles, in search of the mighty gorilla