One of the most popular Mexican celebrations is the Dia de Los Muertos (The day of the dead). On this special holiday, people are celebrating and remembering loved ones, who have moved on to higher realms. Music, colours, food, this holiday has a little bit of everything. This day has been quite widely used in slots before, so Calavera Crush isn’t something totally new, but it’s one of those themes that can be executed in many different ways, and these games are usually quite jolly and fun.

Calavera is a depiction of a human skull. Skulls in different forms and colours appear very often in the time of this holiday. This slot is also heavily themed around sweets, hence the second part of the title is Crush, seemingly taken from Candy Crush. So in the end, Calavera Crush is born, a slot with skulls and sweets. Yggdrasil is a top-tier casino software studio, so we’re quite excited to see what have they cooked up today.

Like many slots that have been inspired by the popular Candy Crush game, Calavera Crush uses a scatter pays game layout. This means that wins are made up of a number of matching symbols instead of having the need to line them up. The size of the layout is 6 by 5. Calavera Crush has a very jolly atmosphere and beautiful game visuals. We think that Yggdrasil have managed to successfully portray the spirit of this holiday. Mariachi music has had its fair share of appearances on video slots, but it never seems to get old. 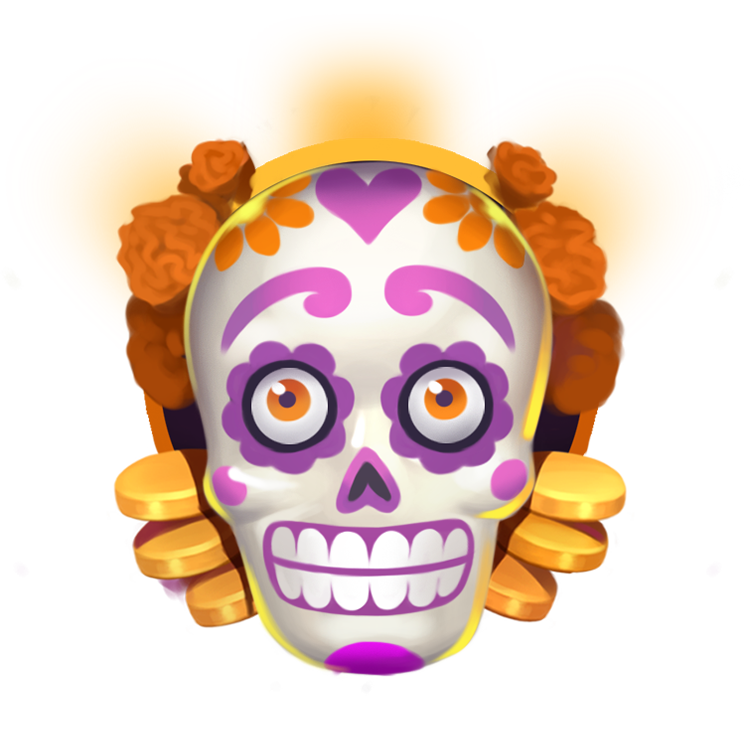 If you have a sweet tooth, then you will love symbols on Calavera Crush. Paytable begins with various sweets such as lollipops, cupcakes, doughnuts and other candies. The symbols with higher value though are Calaveras or skulls. There are four different skulls and six sweets. We like the way that symbols are made, they are pleasing to look at, which is important in any video slot. By being a Scatter pays slot, Calavera Crush has an Avalanche mechanism, so all winning symbols are removed, creating space for new symbols to drop in from above.

Calavera Crush is a powerful slot, that comes with a highly volatile game model. The hit rate for wins is around 40%. The best win you can score on Calavera Crush is 5,000x. There are several RTP variants, but at best, the RTP for Calavera Crush is 96%. The lowest possible variant is 86%. Yggdrasil have made sure that Calavera Crush is optimized on all devices. The available bet range is 0.20 – 100.

Wild symbols are a bit more special in Calavera Crush. Wild symbols may appear randomly after any avalanche and they also increase the multiplier by +1, +2 or +3. You will recognize these symbols as pinata stars.

Probably the best symbol you can land on Calavera Crush is the scatter. You’ll need to get at least 4 scatters to trigger the Free Spins bonus feature. Of course, the more scatters you get the bigger your reward. For 4, 5 or 6 scatters you will get 8, 12 or 18 Free Spins. Each set of four or more scatters during the bonus game awards 4 extra Free Spins. A special addition to this Free Spins bonus is quite simple – the winning multiplier does not reset between spins as it does during the base game. You may also buy two Free Spins variants. The standard bonus costs 200x while the Bonus Max version is 800x.

On Calavera Crush, there is also a Golden Bet button. By activating it, your chance to trigger Free Spins doubles, but the cost of your bet is increased by 25%. 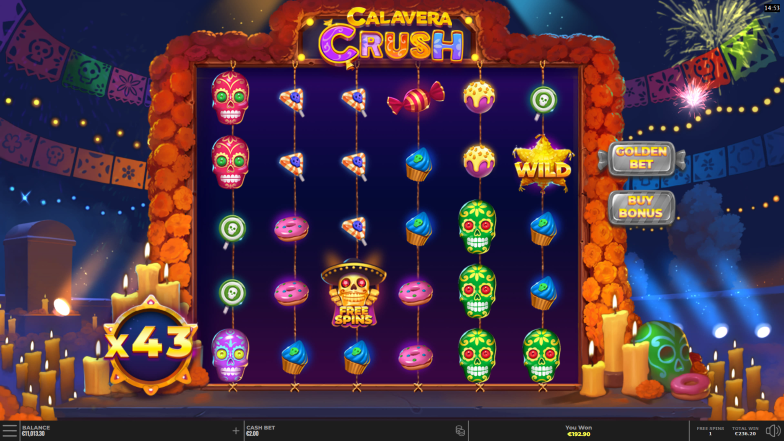 Calavera Crush is a nice little game from Yggdrasil. We certainly enjoyed the way It looks and feels. It provides a wonderful festive atmosphere, so it’s quite fun to play it. The base model for this game is quite simple. It’s a scatter pays slot with an avalanche mechanism and a persistent multiplier throughout Free Spins. This provides an experience that is somewhat similar to a regular Megaways slot. Calavera Crush is not the highest-tier casino game from Yggdrasil, but we think it will have a solid shelf-life. As far as Dia de Los Muertos slots go, this one is a solid addition to the ranks.

Can I play Calavera Crush for free?

Yes, if you wish to play this slot for free, then use the available demo player.

What is the max win on Calavera Crush?

Which other Yggdrasil slots I can find on SixSlots?

On SixSlots you can find such Yggdrasil slots as Mexomax and Frost Queen Jackpots.

Imagine a world high up in the sky. Jump in the zeppelin and take a flight together with Fantasma Games