Yggdrasil and their partners have been on the rise. More companies are joining the ranks and those who are already a part of a crew keep on pushing out new and exciting content. The partners have also successfully used some of Yggdrasil’s own mechanisms and features. One such mechanism is the Gigablox. We recently had the pleasure of seeing it implemented on the WaterBlox Gigablox slot by Peter & Sons. That was a well-executed game and it made us quite excited to see, what’s in store for Gigablox in the future. Well, the future is now, because Jelly are releasing the Buffalo Blox Gigablox slot.

If you’ve been to US land-based casinos, then you’ll know that Americans love slots with an American wildlife theme. You know, those games that portray the vast American northern landscapes, which are rich in forests, hills and rivers and, of course, all the animals. It is quite majestic, so we see why it is so appealing. This somewhat classic theme also has a strong foothold in the European market. We’ve seen plenty of such slots, so another one like Buffalo Blox Gigablox is not something unique, at least theme-wise, but it is one of those themes that you rarely get bored of because each provider portrays it differently and usually the outcome is beautiful regardless. There are many majestic creatures roaming the lands of the US, but there are some animals which usually get special attention when it comes to casino slots. On most occasions, the leading animal will be an eagle, wolf or often a buffalo. These buffalos, also known as American bisons, are native to North America, so it’s obvious why they get such screentime. Of course, these big creatures are also strong and mighty, which is the attitude that Buffalo Blox Gigablox wants to show. Buffalo Blox Gigablox is a pretty slot, although the graphics do feel a bit old-school, which perhaps is an effect that Jelly wanted to have, to potentially mimic the classic land-based slots, but that’s just speculation, not a fact. 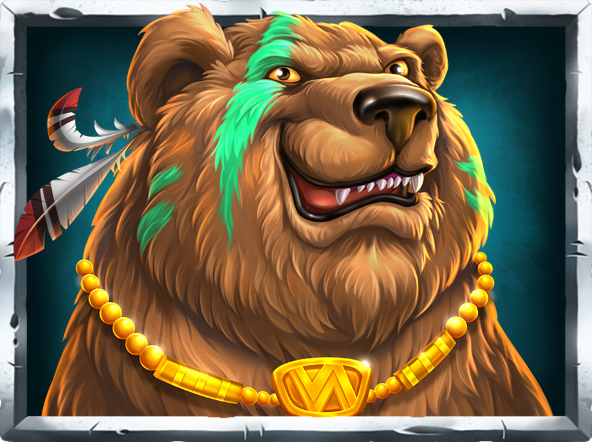 The screen is quite busy, as symbols come in different sizes and there are additional multipliers on the side and the layout itself is very detailed, so Buffalo Blox Gigablox will keep your eyes busy. If we have a look at the game symbols, then you’ll notice that Jelly have opted to use royals for low symbols and animals for high-value symbols. Buffalo is the king, but we can also meet the eagle, wolf and bear, plus there is a random blue diamond in the mix as well. We find it a bit amusing, that the Wild symbol is a coin with Lady Liberty on it. It’s a bit odd to see the Statue of Liberty in deep northern forests instead of New York. With the 5 reel 4 row setup, we are getting 20 paylines.

Due to the Gigablox mechanism, at least two reels per spin can merge to create bigger symbols. These colossal symbols may even extend to a 4x4 size. If we dig in a bit deeper and see the mathematical side of the Buffalo Blox slot, then there is room for improvement. First of all, the RTP is 95%, which is not tragic, but it’s nothing great either. Even though this is a high volatility slot, the max win that it can produce is 2,800x. On WaterBlox, this number was 10,000x, so it’s a rather noticeable difference. These are decent payouts, but not really worthy of a buffalo per se.

The positive thing about Buffalo Blox Gigablox is the frequency at which bonus features trigger. Usually, you won’t need to grind hundreds of spins, to get your hands on some bonus experience. To activate the Buffalo Blox Gigablox Free Spins feature, you need to land 5 or more Diamond scatters. These scatters then reveal either plus 1 or 2 Free Spins, per scatter. Each additional scatter during the bonus play does the same thing. The super-stacked symbols appear far more often and you will also spot more coin symbols during Free Spins. The Gigablox feature will be active on every spin, so you can much easier link up reels and create these colossal symbols. Here is where Lady Liberty comes back as well. By landing 6 or more coin symbols at once, you will be rewarded with an instant prize. The more coins you collect, the bigger is this prize, in the end, paying 2,500x for 20 collected coins. 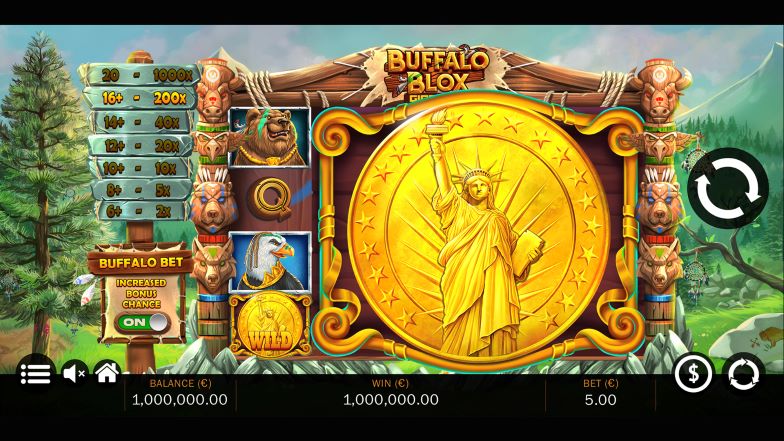 After Big Benji Bonanza, it feels a bit unusual, that Jelly have decided to visit the wildlife of the US. Overall, the Buffalo Blox Gigablox slot looks nice but we’ve seen slots like this many times before, so if it’s an innovation you’re looking for, then keep on searching. Jelly have combined this classic theme with Yggdrasil’s new and gripping Gigablox mechanism, but somehow it feels that things are not clicking the right way. Buffalo Blox Gigablox is a nice holiday retreat, but it’s nothing more than a regular walk in the park. If you’re not an extremely picky player, then Buffalo Blox Gigablox will do just fine.

Yes, you can play Buffalo Blox Gigablox for free, once the official demo version is published.

Yes, you can play this slot in online casinos starting from the 30th of June 2022.

What is the RTP on the Buffalo Blox Gigablox slot?

The RTP on the Buffalo Blox Gigablox slot is 95%.