Ain’t nothing better than a smell of dynamite in the morning. Well, at least that’s what we think some old prospectors thought when waking up, because they couldn’t wait to blow something up, revealing shiny stones which could potentially make them rich. Bomb Bonanza brings us to Wild West, where people were finding many different opportunities how to make living. Those times may be long in the past, but the idea still strongly lives with all the video slots that we’re getting. It’s a theme that Pragmatic Play like to visit from time to time, especially focusing on the gold aspect. We hope you like gold because we’ll be seeing plenty of it on the Bomb Bonanza slot. As far as our Wild West knowledge goes, we don’t think that people often blew up towns just to see if there are any valuables in the ground, but that is the case with Bomb Bonanza. The perpetrator is just smugly standing there in midst of the wreckage that he has created. Dynamite in one hand and lighter in the other, looks like he has no plans of stopping. The sleepy town which now has been converted into a gold mine visually looks nice. Bomb Bonanza has some decent visuals/graphics. Stacked on a wooden platform, the layout consists of 5 reels and 5 rows. 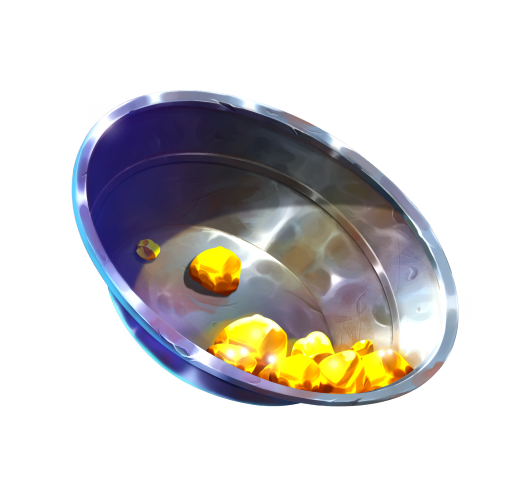 Bomb Bonanza game comes with 8 regular symbols and 3 specials. The regular bunch is split into highs and lows. Naturally, the low symbols are J, Q, K and A. High value symbols are a pickaxe, some gold nuggets, a bag of gold and the prospector. With 50 paylines, Bomb Bonanza is an interesting slot to play. It’s full of straightforward action which we did enjoy. Specials symbols also include the Wild, which substitutes for all other symbols except the Free Spins symbol.

Looks don’t always match reality. This can be said about Bomb Bonanza. It’s all about bombs but the nature of the game is not that explosive. It still is a high volatility game with decent potential, but Bomb Bonanza won’t necessarily make headlines. The default RTP is pretty decent, which is 96.46%, but two lower variants of 95.50% and 94.50% do exist, so don’t forget about these too. Max win on Bomb Bonanza is a little bit over 2,000x. Bomb Bonanza's bet range is 0.25 – 125.

These Wilds on Bomb Bonanza aren’t the most typical as they do have explosive capabilities. If one Wild symbol hits, all Wilds on the screen have a chance to randomly expand to different directions. The square size of expansion can even cover the whole layout, so that’s a huge 5x5 Wild explosion, which can handsomely boost up your balance.

The free Spins symbol does what you might expect – trigger the Free Spins feature. This Bomb Bonanza bonus game begins with 6 free spins. The free Spins feature introduces a special Gold Nugget symbol, which only appears during this bonus stint. Any instances of these nuggets are collected and added to the collection meter. These nuggets also explode, whereat remaining symbols fall to the bottom of the screen and empty spots are filled with other new symbols from the top. By collecting nugget symbols, you progress through the Free Spins levels. You will begin with level 1 and the default 1x1 Wild size. The other levels are the following: 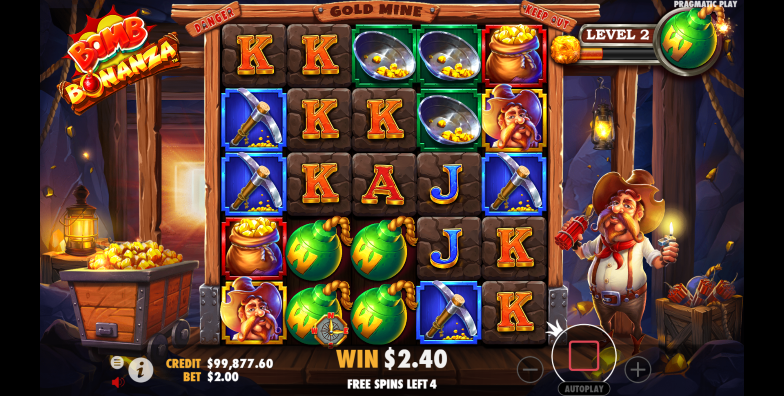 One thing we enjoy about Bomb Bonanza is its action-filled gameplay. You can have loads of fun during the base game and bonus game. Pragmatic Play seems to be fond of bonanzas, but in all honesty Bomb Bonanza is a decent casino game. It may not look like it at first, but Bomb Bonanza is a really simple game, that puts high emphasis on Wild symbols and their expansion. It’s quite important to note though, that these Wilds are not guaranteed to explode strictly inside the layout. This means that bigger wild explosions like 4x4 and 5x5 can land partly outside the layout, thus awarding a smaller payout than expected. Bomb Bonanza's max win is 2,000x, so it makes sense why the potential isn’t that massive. The theme is fun and the gameplay is nice, so Bomb Bonanza still can provide a good dose of entertainment.

What is the minimum bet on Bomb Bonanza?

Can I play Bomb Bonanza on my mobile device?

Yes, you may play Bomb Bonanza on any mobile smart device.

Music, colors, food, this slot is like a holiday that has it all. Celebrate and win some sweet wins. Time for Dia de los Muertos!