American Indians used to believe that nature and one’s spirit is tightly connected. That’s also why war chiefs were named after various animals because they themselves felt like a small part of that animal was inside them. Blazing Bull 2 lets you enter the animal spirit world. We will meet different animals in the forest, but there is something eerie about them, as everything is not as it seems. Like the leader among them stands the mighty Blazing Bull. People tremble in its presence, but today we are standing against it. It may not be the Minotaur, but he is every bit as vicious as the monster.

This is the second time that we meet the Blazing Bull, as there are two parts to this story. The first Blazing Bull was an average slot at best, so it’s a bit of a surprise that Kalamba Games decided to have another go with the bull. Perhaps, they felt like the original Blazing Bull should have done better, perhaps they just liked the strange motive and they wanted to create another such slot. Whatever the case, this moment belongs to the mysterious bull, so let’s see if it deserved to be resurrected, or maybe, it should have been kept secluded.

The original Blazing Bull was a bit strange and eerie, but Blazing Bull 2 takes it up a notch. Of course, the spirit world ain’t exactly Disney Land, so we can understand why Kalamba Games went with this mysterious and slightly creepy presentation. Although the win sounds are unexpectedly cheerful. The background visuals consist of the forest and two animal totems, which serve as the borders for the extended 6 reels 4 row layout. This is not the first time when Kalamba go down a different presentation path. Their Ducks Till Dawn and Age of Huracan slots both are a bit strange and creepy.

Last but not least, we got the game symbols which continue the creepy trend. These are animals such as owl, wolf, mustang, deer and, of course, the blazing bull himself, engulfed in flames. All animals have white, ghost-like eyes, which further supports our spirit theory. Besides these high symbols, there are also 6 low symbols, which range from 9 to A, following the card symbol pattern. Blazing Bull 2 comes with 4,096 paylines, so plenty of ways to show off your wins.

Blazing Bull 2 lives up to its name, because the payouts are truly scorching. The max win is 50,000x, which is a life-changing potential. With big wins come high volatility, that’s the way it’s always been. The standard RTP is 96.26% but it goes up to 97.21% while using the bonus buy option. Blazing Bull 2 runs well on all devices. The bet range for this slot is 0.50 – 60. If we compare both Blazing Bull game payouts, then the second part is vastly superior. Even though a lot of stats are equal, Blazing Bull 2 has a 25 times bigger potential. That is a huge difference.

It seems like we no longer get slots from Kalamba, which don’t use one of the “K” bonus features. We actually like, how Kalamba are continuously pushing their own product, instead of hopping on general trends, for example, Megaways. Blazing Bull 2 comes with one of their most popular mechanisms, which is the K-Boost. This is more of a mechanism than a feature because, with K-Boost’s help, we get to one of the bonuses. Above the reels, you will spot two meters. One is responsible for the Multiplier Wilds Bonus and the other for K-Split Bonus. Each bet fills both of these meters, so the more bets you make, the better is the bonus once you actually trigger it.

On Blazing Bull 2 there are two Free Spin variants. Both bonuses are triggered by 3 or more corresponding bonus symbols. Orange bonus symbols lead to Multiplier Wild Free Spins. These Free Spins come with a bunch of Wilds, which appear with additional Wild Multipliers. These multipliers range from 2x to 8x. On the other hand, the blue bonus symbols lead to K-Split Free Spins. During this bonus, one symbol is selected on every spin, to become the K-Split symbol. Afterwards, all instances of this symbol split, creating multiple symbols in a single spot. Extra spins can be acquired by landing additional bonus symbols. For 2, 3, 4, 5 and 6 bonus symbols, players get 2, 5, 8, 10 and 15 extra spins respectively. If you want to have a go at one of the bonuses straight away, then the HyperBonus option comes to your aid. This feature lets you buy 4 bonus variants. 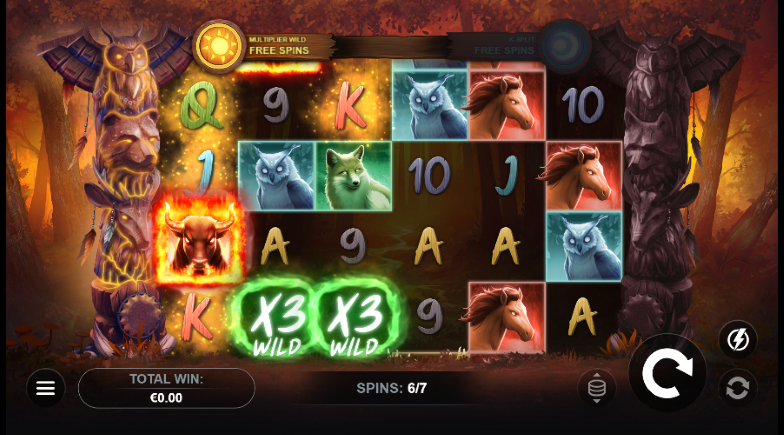 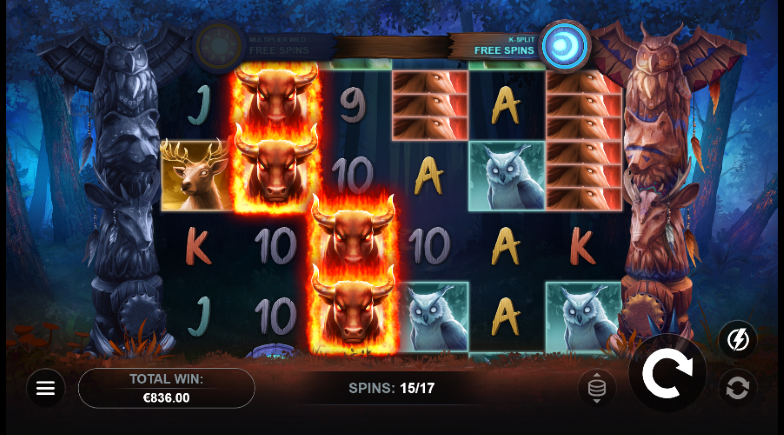 From time to time, Kalamba Games tend to release these strange slots, which explore different ideas and settings. If you’re into that spiritual nature setting, then Blazing Bull 2 could be an interesting slot for you, but even if you’re not, it still provides a really solid gameplay experience. The biggest change has been the max payout, which has increased 25 times. That’s something that the original title was lacking so it’s great to see Kalamba making these significant adjustments. It’s perhaps not the finest slot we’ve seen from Kalamba, but we believe that there are players which will truly enjoy what Blazing Bull 2 can bring.

This year we are the ones visiting Santa. We’re heading to the North Pole, collecting presents and Jackpots along the way!