The ancient land of Egypt holds many wonders. Some of them have been widely covered, but some have remained hidden. Even after all these centuries there are still treasures which have not been found. There are stories of lost treasures hidden in a temple, which was the home of wealthiest and most powerful Priestesses of those times. Players can feel like adventurers, while they look for treasures which lay inside. The temple is dedicated to Anubis, the god of death and afterlife and it’s his moon that is shining over us. Anubis’ Moon is another Egyptian themed slot from Evoplay. Just this year alone, Evoplay have released a couple of these Egyptian slots, so we have plenty of options to choose from. Anubis’ Moon comes with special scatter retrigger feature, which is capable of producing wins that go all the way to 5,000x. Combining some simple ideas, Anubis’ Moon could provide you the gameplay experience that you’ve been looking for.

Long gone are the days when Egyptian slots had simple visuals and features. Now providers are taking this generic theme and they turn it into something spectacular. We’ve said this numerous times before, Evoplay are really skilled at making good looking games. Anubis’ Moon is a perfect example, how you can take something seemingly simple and turn it into something truly beautiful. There is not that much happening around, but what we do see looks great. It’s a dark night and only the fiery torches and the moon shines over us. The music also sets a mysterious and authentic tone. The animations are smooth and the game just feels great to play. 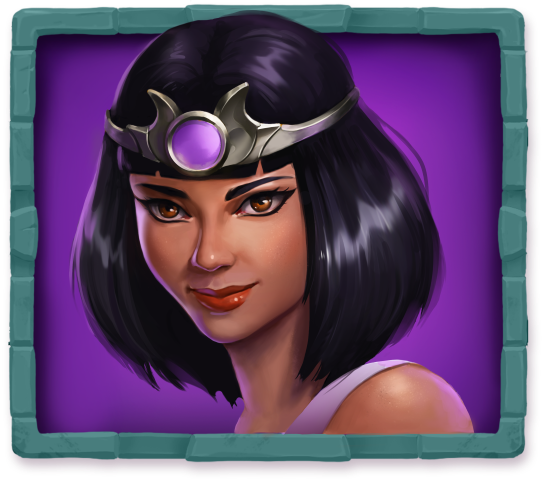 Two golden Anubis’ statues stand in front of large stone gate which holds the 5x4 game layout. Anubis’ Moon utilizes 20 paylines, so in this regard, it’s quite a typical setup from Evoplay. Four clay tablets will be our low symbols while high symbols are 3 priestesses. We appreciate that Evoplay have produced a unique set of low symbols instead of recycling the same old card suits and symbols. The most impressive symbol without the doubt is the red scarab, which is also considered the scatter. Couple of scarabs won’t do much, but it’s a whole different story once you’ll be landing dozens of them.

Anubis’ Moon is quite volatile, but not to an extreme extent, as Evoplay themselves have stated it as medium-high. This could provide gameplay that is a bit more forgiving. The RTP for Anubis’ Moon is exactly on the average 96% mark. With the scatter feature, the max win can reach up to 5,000x. This is only a half of what Temple of Dead could offer, but you have to consider that the hit rate in Anubis’ Moon is twice as better. Anubis’ Moon runs really well on all devices. The slots’ bet range is 0.10 – 75.

Even though Anubis’ Moon holds some treasures, it’s not packed with bonus features. The action revolves around scatters. Regardless of their position, scatters create winning combinations. Instead of usual Free Spins, 3 or more scatters trigger the Respin feature. These scatters become sticky as they remain in their position for the next respin. Each new scatter activates another respin. If you can go on for long enough and collect all 20 scatters, then the max prize of 5,000x is awarded. Even if you don’t reach 20, these scatters can provide some nice payouts, although a couple of scatters won’t do much, as, for example, 7 scatters award just 9x. 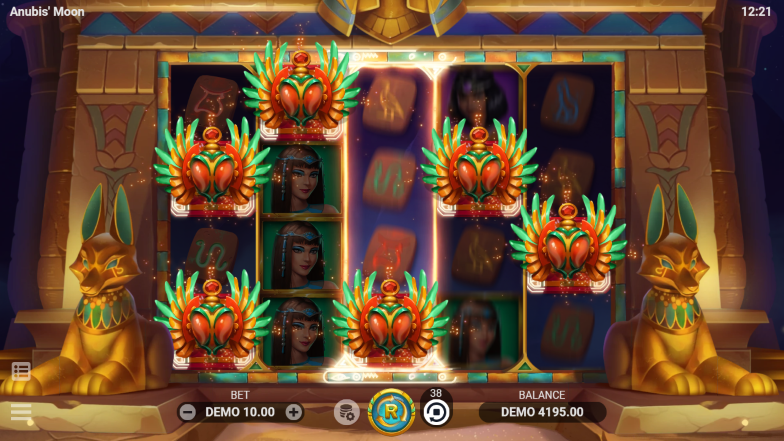 Anubis’ Moon comes with a simple theme and a simple bonus feature, but somehow Evoplay have managed to make this into a truly entertaining slot. Anubis’ Moon seems like a perfect game for those who are looking for something basic and straightforward, without any complicated features and flashy visuals. This game provides that classic casino slot feeling with a modern touch. The big question, is the Respin feature better than, let’s say regular expanding Free Spins? Even though this feature can bring 5,000x, it’s not as exciting as a round of Free Spins, but still, it’s all about the potential and Anubis’ Moon has a good one. Anubis’ Moon might not go head to head with some of the biggest Egyptian slots, but it’s still a solid addition to this massively competitive portfolio of games.

Can I play Anubis’ Moon for Free?

How do I trigger the Respin feature on Anubis’ Moon?

To trigger the respin feature, you will need to land at least 3 scatter symbols.

What other similar Evoplay games I can play?

If you enjoyed Anubis’ Moon then you should take a look at Temple of Dead, Runes of Destiny and Animal Quest, which also are available for free play on SixSlots page.