Microgaming partner studio Triple Edge Studios are no newcomers to us. We already enjoyed such slots as Assassin Moon. If this still doesn’t ring any bells, then you surely have heard about the Book of Oz, without a doubt their most successful title to this date. Roughly two years ago, Triple Edge released another slot called Ancient Fortunes: Zeus, which is the predecessor to the slot that we will take a look at today. We are still in the realms of Greek Gods, but this time moving closer to the sea. Ancient Fortunes: Poseidon also comes with Megaways, which surely don’t need an introduction. A lot of Microgaming partners have used the opportunity of the partnership, implementing the Megaways mechanism to their slots. More than once these opportunities have proven to be fruitful, which we hope is the case today as well.

Lately, we’ve had experience with a lot of newer Microgaming partners, who are just getting their feet wet in the video slot world. This is not the case with Triple Edge Studios, because this provider has been around for quite a while, so surely the experience adds to the quality. Ancient Greek gods have been well covered, especially ones like Zeus, Hades, Athena and Poseidon. Of course, who isn’t attracted to these majestic deities? Ancient Fortunes: Poseidon Megaways comes with the trademarked Rolling Reels feature, plus some fantastic Jackpots. Poseidon’s kingdom the sunken city of Atlantis is somewhere beneath the waves. This is our final destination, so it’s time to stand face to face with a god.

Where to Play the Slot for Real Money? We don’t want to overuse that word, but Ancient Fortune: Poseidon Megaways is quite intense. The only relaxing thing could be the fishes in the background, but otherwise, it’s a fervid slot. Large malachite-like pillars set the borders of the 6 reel game layout. You wouldn’t expect to see it under the water, but a stream of lava covers the bottom floor. We can also catch a glimpse of the lost city in the background. Like in most cases, the main mood setter is the music and the audio clips that follow the wins and tumbles. Ancient Fortunes: Poseidon is very thumpy and bassy, which makes the pace of the game faster. There are also a lot of intense colours, which pop out from all the place. In general, we do like what we see, Triple Edge Studios have done a proper nice job. 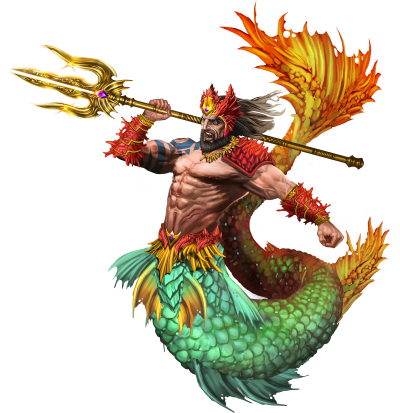 Ancient Fortunes: Poseidon Megaways comes with 2-7 rows a spin, so the amount of symbols on each spin differs. The symbols themselves are quite simple but well made. Low symbols cover a bunch of animals styled in a Minoan fashion. You will find seashell, crab, dolphin, Taurus, horse and octopus. After those follow green and blue gemstones, which value-wise still could belong to low symbols. With much better payouts follows the ruby stone and a golden Poseidon mask. Due to Megaways, Ancient Fortunes: Poseidon offers up to 117,649 paylines. The wild symbol is the tip of Poseidon’s spear, a common logo that represents the god.

Jackpots make the headlines, but we have to look at the whole game, including the main game, to understand where it stands in comparison with other Megaways slots. Ancient Fortune: Poseidon Megaways volatility is medium. Combine it with 95.98% RTP and the rather low symbol payouts and you get the main game model which is not all that exciting. Truthfully, Ancient Fortune: Poseidon is one of those slots where all you hope for is one of the bonus features, instead of expecting something great from the base game. The max payout is 10,000x, which comes with the help of Jackpots. Ancient Fortunes: Poseidon Megaways bet range is 0.40 – 40.

The tumble mechanism, which comes with every Megaways slot, also known as Rolling Reels makes its appearance in Ancient Fortunes: Poseidon. This simply replaces all the winning symbols with new ones, meaning that you can score consecutive wins with a single bet. As simple as that.

Some players, more than anything else love Free Spins, some prefer Jackpots, but Ancient Fortunes: Poseidon Megaways lets you have both. Jackpots can be triggered during both the main and bonus game. The Jackpot mini-game is awarded randomly, but the more wilds you collect in the pot the better is the triggering chance. Jackpot mini-game starts with 12 tokens facing down. Players then one by one reveal the contents of each token. When 3 tokens are matched the corresponding jackpot is paid out. Jackpot values are 15x for Mini, 50x for Minor, 100x for Major and 5,000x for Mega. 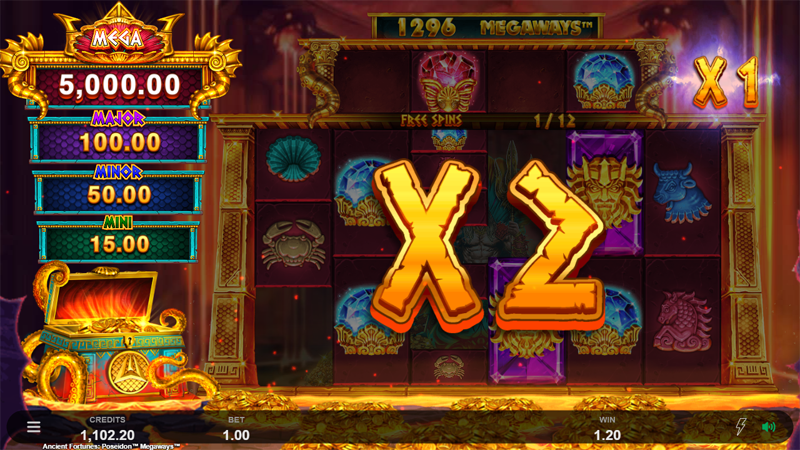 When it comes to Free Spins, the situation is the following – collect 4 scatters to get 12 Free Spins. The scatters need to spell out the word GOLD. Every additional scatter will get you +5 spins, but during the bonus itself, you will need 3 scatters to get the same reward. Ancient Fortunes: Poseidon Free Spins use the most classical Megaways bonus mechanism. Every tumble/Rolling Reel awards a 1x multiplier. This multiplier doesn’t reset between spins. So it’s up to you to crank up that multiplier as high as you can before all the spins end.

The visual resemblance between both games is uncanny, but the gameplay surely is better on Ancient Fortunes: Poseidon Megaways. Of course, the actual Megaways tad matters a lot as well, but perhaps not as much as one might initially think. It’s a very standard, textbook Megaways slot, with no real innovation. Combine it with an Ancient Greek theme and you have a game that is not that much different to what we already have seen elsewhere. Jackpots are a nice addition, and the visuals are pretty, so there are a couple of points that make Ancient Fortunes: Poseidon Megaways worthwhile.

The warm sands of Egypt are welcoming you, treasure hunter. Open up the books and seek your riches up to 10,000x!