From all the mythologies in the world, Ancient Greek has to be one of the most remarkable. Ancient Greece in general is awe-inspiring. Their culture, ideology and traditions are so great, that they even have a strong impact on the modern way of living. Ancient Greeks always held gods in high regard, they were mighty and heroic, like role models for all the people. The Microgaming partner studio SpinPlay Games have also paid their respects to the benevolent gods. Their first Amazing Link slot was about the god Zeus, the most famous of them all. Today we will be taking a look at the sequel named Amazing Link Apollo. Amazing Link Zeus came out at the start of 2021, so not that long of a time has passed until follow up. Let’s see what’s new, what’s improved and if Amazing Link Apollo is worth our time.

There are so many gods on Olympus, that we have to wonder, why SpinPlay Games went with Apollo. Not that there is anything wrong with Apollo, he is one of the most recognized Greek gods, but we are just wondering about the thought process behind the productions. Apollo has also appeared in Roman mythology, but his role has always been the same. Most notably, he is known as the god of sun and archery, which is reflected in the Amazing Link Apollo. Glory awaits us, so let’s not hinder god's plans.

Where to Play Slots from SpinPlay Games?

One of the first things you notice is the glorious music, which further enhances this divine feeling that you could expect from the gods. Amazing Link Apollo is a 5 reel slot with 20 paylines. The layout itself has a nice golden lining, while the sun shines behind it. We don’t claim to be historians, but the wall behind the reels looks very modern, it looks more like a rich celebrity's estate, than a place of a god. The visual presentation isn’t breathtaking, but it looks well enough. If we compare it to Amazing Link Zeus, then both games are very similar, in the way of sound and look.

Even though we enjoy what we see, it’s also quite obvious that SpinPlay Games have been slacking off a bit. The competition for Amazing Link Apollo is with its predecessor so it’s only natural that we compare both games to see what actually different. The thing is, there are not so many differences, even with symbols as most of them have been just straight off taken off the previous game or just slightly altered, for example, the low symbols 9-A, vase and lyre are the same. The only unique symbol is the chariot, while the top-paying regular has been slightly changed up from Pegasus to a horse. The Wild symbol, which was Zeus is now Apollo, wielding his golden bow. The wild symbol can appear in a 3x1 version, covering a full reel size.

Shall we put both slots one against the other once again? That would seem like the best course of action if we want to determine who comes out on top, Zeus or Apollo. Unsurprisingly, both slots are also almost identical with payouts. Both Amazing Link slots can produce wins up to 5,000x. All in all, that’s a great payout, surely worthy of the gods. Both slots also use a medium-high volatility setting, so if you played Amazing Link Zeus then Amazing Link Apollo will feel vastly similar. Amazing Link Apollo has a tad bit better return (RTP). Instead of 96.33% we now got 96.40%, so there you have it, a slight improvement, but an improvement nonetheless. Amazing Link Apollo bet range is 0.20 – 50.

The trademark for these games is the Amazing Link feature. This bonus can be compared to some hold and win features that we have seen plenty of times before. It’s a bit funny because a lot of providers implement this bonus on their slots, they only add their own name to it, to make it seems more special than it actually is. Amazing Link is triggered by 6 or more Amazing Symbols which then get locked in the reels. During this bonus phase, only Amazing Symbol can land. At the start, you will be given 3 spins, but every time you land a new Amazing Symbol, they will reset back to 3. The Amazing Symbols contain different payout values, which get collected at the end of the bonus feature. At the end of the Amazing Link feature or at the end of any regular base spin an extra Pick Feature can randomly trigger. The main objective of this feature is to match 3 icons to win the respective prize. The prize could be one of the four Jackpots, which are Mini, Minor, Major and Mega.

Besides the trademarked feature, Amazing Link Apollo also offers some Free Spins. Land 3 bonus symbols (Parthenon) to unlock this feature. There is no set Free Spins amount, instead, you will be given a choice between picking how many spins and Amazing Reels you want respectively. The Amazing Reels only have wilds and Amazing symbols on them. Each new bonus symbol awards +1 Free Spin and upgrades the corresponding reel until the end of the bonus. 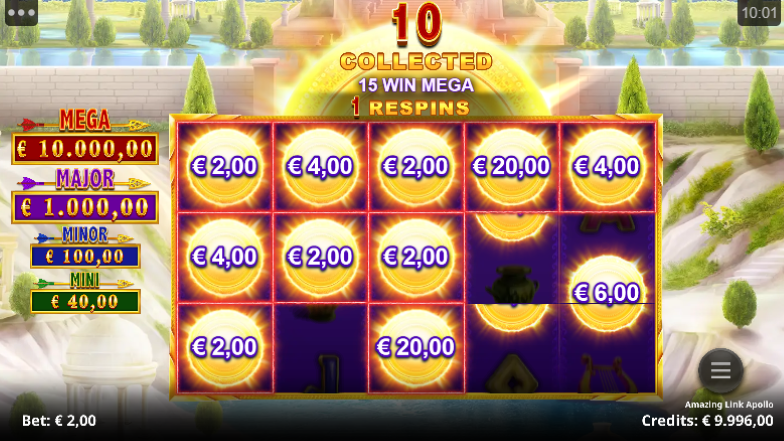