Sci-fi (Science Fiction) has been a relevant topic throughout the years, even long before we knew slots as we do today. It’s an imaginative concept about the future. This time the concept is brought forth from Wazdan with their new title called Reel Hero™.

In the focus of Reel Hero™ are a band of superheroes and their task is to save the universe. Now, where have we heard that before? Besides the, somewhat, elementary setting, this slot has a lot to offer. There are plenty of unique new features that are implemented on Reel Hero™. It’s very dynamic as well there are plenty of options and flashy animations. Let’s see if Reel Hero™ has what it takes to be Wazdan’s new flagship or, rather, spaceship.

A lot is happening on the screen when you open up the Reel Hero™, so at first, this slot might seem overcomplicated, that’s why we will do our best to explain the way it works. 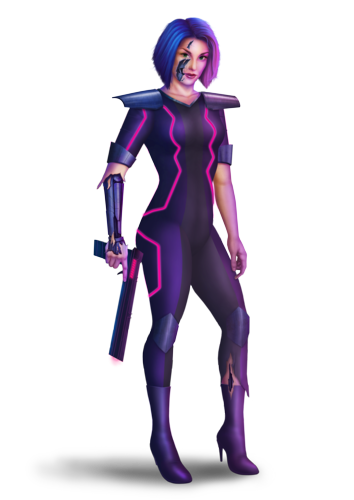 Purple-Blue theme dominates the scenery, these seem to like the go to colours with everything that’s Sci-Fi. There is a bright, big, scorching star in the background, perhaps the sun. Music as well, as the sound effects, are futuristic and the graphical overlay looks quite nice. Speaking of the audio, the addition of announcer is great, especially when names of the heroes are announced during Free Spins, this gives it a feeling of a fighting game that you can find on arcade machines.

Reel Hero™ runs quite well, but it doesn’t run perfectly. We feel like the engine that Wazdan uses might not be good enough to support all the visual effects. Switching to Ultra Lite mode seems to help a bit in this regard.

Regular symbols on Reel Hero™ are very classic. Besides the J, K, Q, A, we have a star, bell, number seven and diamond symbol. Since we have gone all out on the Sci-Fi theme, it’s underwhelming not to see any futuristic ideas for the symbols. We are pretty sure regular bells aren’t a thing of future. There is also a Wild Symbol and a Scatter.

Paylines are on the low side, being only 20. On Reel Hero™, you have a chance to select your volatility. There are three settings – low, standard, high. Ability to choose your volatility is seen on many other Wazdan slots as well. Max win has been stated as 1050x. This is not a huge number, but it’s not the worst we’ve seen. RTP of 96.22% is a standard value and so is the betting range. 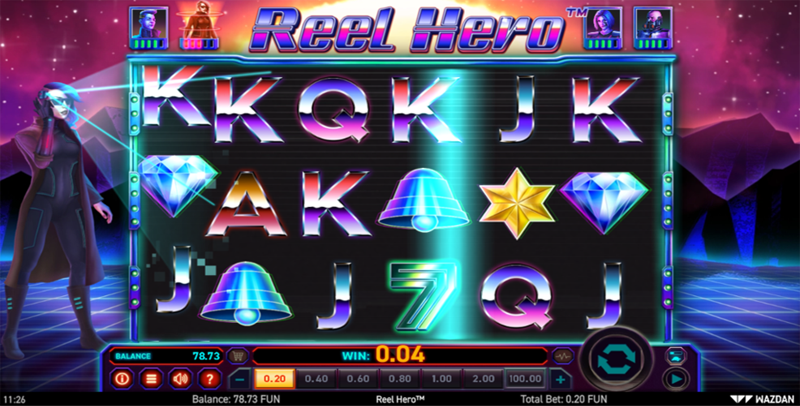 Besides these, on Reel Hero™, we also have our trusty Free Spins. These of course are triggered by landing 3 or more Scatters. At the beginning of the feature game randomly gives you two hero bonuses, by then announcing their names. A symbol of +3FS may randomly appear. This grants an additional 3 Free Spins. 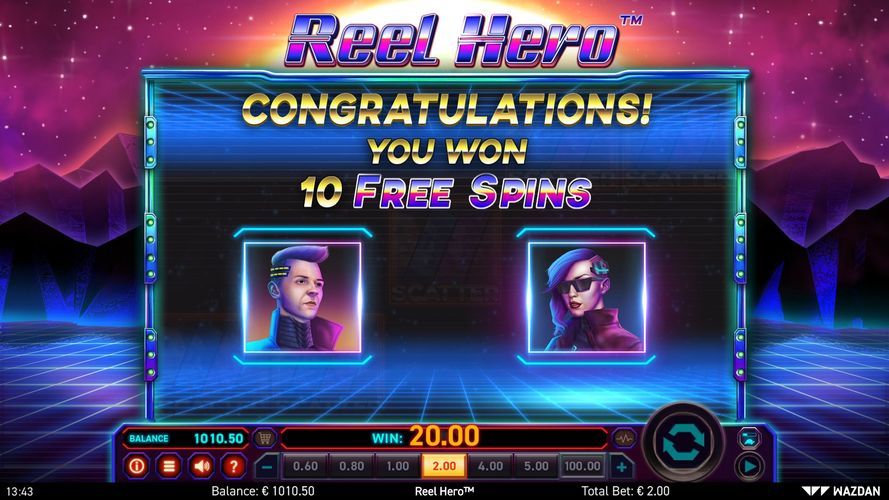 Reel Hero’s greatest inclusion is Hero Bonus Features. These give the game a character and they make it stand out. It is a nice game, but it could have been so much better if the developers explored their imagination more. But even with all the flaws, Reel Hero™ still is an impressive Sci-Fi slot.