Online casino software provider Relax Gaming is once again releasing a new title, this time it is called Hellcatraz. The theme is set in the name, the prison of Alcatraz is where we’re heading, with Golden Gate Bridge visible in the back.

Hellcatraz draws similarities from some other Relax Gaming titles, but it is also very unique in its way. The game has 46,656 paylines with a max payout of 51,840x, these are very ambitious numbers, so let us see how that performs in its actuality.

Sound design and graphics on Hellcatraz are 8-bit themed, which takes us about 30 years back to the late ’80s where this style of games was seen on arcade machines. On the contrary to the gloomy life of prison, the game itself feels lively, fun, and bubbly. Background soundtrack consists of a lovely 8-bit tune and a general prison/city ambiance. Although, within time, the sounds may get repetitive quite soon.

Hellcatraz offers two game modes to choose from. The first one being the Mixed mode – it is with high volatility, and the other one – The Lockdown Mode with a ‘’super high’’ volatility.

It is a 6 Reel 6 Row layout with a tumble type of mechanism, meaning that winning symbols disappear and are replaced with new dropping ones, to some extent you can also compare this style to Tetris. Winning combinations are made from matching symbols that are positioned on three or more adjacent reel, starting from the leftmost side. Also important to note, that only the longest matching combination is paid out for each symbol.

On Hellcatraz Wild symbols exist from second to the sixth reel and, of course, they function as in most of the games, substituting for all normal symbols.

There are three different RTP’s on Hellcatraz. The lowest RTP is dished out to Mixed Mode which is 96.30%. Next up we have an RTP of 96.46% which is contributed to the Lockdown mode. Besides the RTP difference, mode selection defines the way that the Mystery Symbol mechanism works, but more on that later.

Let’s get into all the different symbols. Four of the lowest symbols are clover, diamond, heart, and a star, all of these have the same value. Next up, with already growing pay out, are the handcuffs, guard badge, a shark, criminal, who draws a very strong resemblance to Al Capone and the most valuable symbol, policeman.

Hellcatraz boasts an impressive 46,656 ways to win and the overall payout can reach up to 51,840x, so instead of serving a sentence, this prison can serve you a stunning win.

There are few neat features on Hellcatraz, but, truth to be told, these features didn’t really bring out a lot of excitement for us, but let’s break down each of them, so you can decide for yourself.

First up, the Mystery Reveal Feature. On every spin, there are mystery symbols with separate or same values. With every symbol breakdown (cascade) the value of the mystery symbols drops by one. When the counter reaches zero, the symbol reveals itself and all the mystery symbols turn into the same symbol. On Mixed mode the symbols can have different values, for example, two symbols starting with 2 and 5, on the opposite, Lockdown mode makes all the counters identical.

Next, The Key Collector. There are Key symbols that can appear randomly on every spin. Each acquired Key rewards a player with one to ten keys. This directly transitions to our next feature, which is called Super Free Spins.

Super Free Spins is the main prize to score on Hellcatraz. Once the player collects 2000 keys in total this feature is triggered. At the start, you are given 5 Free Spins with the ability to get additional ones by landing the Golden Mystery Symbol. During free spins, all the Mystery symbols reveal themselves instantly without a need to cascade them. 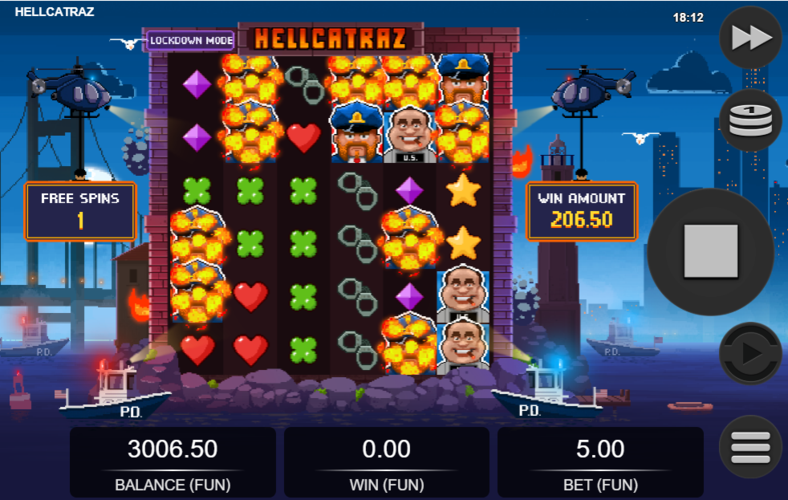 When it comes down to the overall design of the game, a lot of people may be torn on where they stand with Hellcatraz. Some players will without a doubt enjoy the 8-bit style, but there are few others who surely won’t. Hellcatraz is fresh and funky, but it can get quite repetitive at some points, bonus features are there, but they are not bringing in that ‘’hype’’ element. But we don’t want to be too critical as well, Relax Gaming has stepped up nicely with this title, it is a good addition to the casino world.

The wolves are howling and the moon is illuminating the nightly sky. Join the wolf pack and get a chance at a 30,000x win!