Buckle up your boots and saddle your horse, it is time to take a trip down the Old West once more with Nolimit City’s new banger Deadwood. This is coming off as an indirect sequel to already renowned game Tombstone. Both games are based on real-life historical prospector towns, where cowboys, saloons, the gold rush, and folk heroes were born.

The Deadwood itself has improved in almost every aspect from the previous game, it has multiple extra features, with Nolimit City’s new trademarked xNudge feature included as well. Deadwood is a bold game with high volatility and 576 paylines, combined with its many features, this one might make you go crazy as a loon.

Symbols in Deadwood slot, of course, are western-themed with five lowest being the classical Ace, King, Queen, Jack, 10 and top ones being shotgun, whiskey bottle, bank safe, pocket watch, and gold bars. Best symbol (gold bars) pay 3.75 for five of kind. A winning combination is of the same symbol that pays from left to right on adjacent reels.

Reels have been expanded with now a new 3-4-4-4-3 format which in return grants the opportunity for 576 ways to win, which is five times more than the original counterpart.

We need to take a closer look at the gameplay itself because for now, we can’t get enough of it. Deadwood is polished, the game runs smooth as bourbon. The background music sets the mood perfectly and little visual effects in the background make it feel more lively and immersive. When you get to the Deadwood bonus round, the screen scorches up, making things intense, as they should be.

Deadwood utilizes a lot of features to ensure that the game stays relevant and fresh for the time to come. One of the big selling points is the xNudge feature. If that rings a bell, then you have probably already experienced it first hand on Nolimit City games like Harlequin Carnival and Dragon Tribe. To summarize it, a Wild symbol exists on the second, third, and fourth reel, once a Wild symbol lands on the player's screen it will always nudge until it is fully visible and 4 rows high, hence the name xNudge.

For every nudge that Wild symbol makes, the multiplier for the said Wild will increase by one, if there are other Wild symbols on the screen, then they will add up to each other and make one complete multiplier.

Next up on Deadwood slot we have the Shoot Out feature. When playing the main game, there is a chance to land the Sheriff’s Badge on the first and the fifth reel. Once that is done, the said Deadwood feature will turn all the low symbols on the three center reels into Wilds. This will be active only on the ongoing spin.

Continuing, Deadwood features Free Spins. Three scatter symbols trigger the bonus game. Afterward, you are given a chance to choose between two variants of the bonus, this concept draws some parallels to the bonus game of Dead or Alive, with a choice between playing it safer or having a bigger risk, bigger reward position. 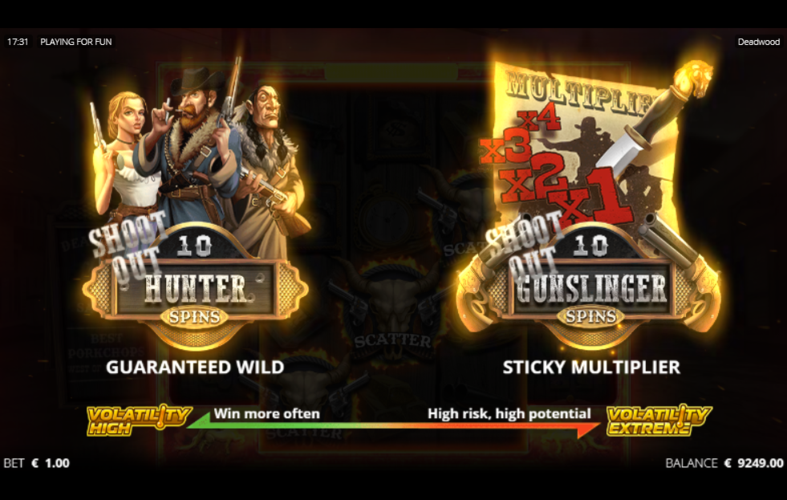 The safer option is called the Hunter spins. On this choice Deadwood guarantees at least 1 Wild on every spin, making sure that there is a win regularly. If a player manages to land two Sheriff Badges, this feature gets upgraded to Shoot Out Hunter Spins, more on that in a second. 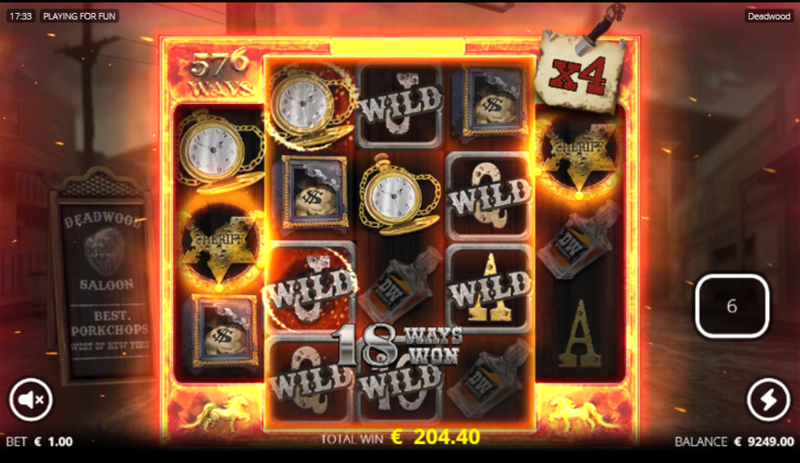 The other choice on the Deadwood bonus is the Gunslinger spins. There is no guaranteed Wild every spin, but all the multipliers you get stick throughout the whole feature meaning that you can rack up a pretty solid total multiplier. Every Sheriff Badge you land grants an extra free spin, if you land both of them, then the feature upgrades to Deadwood Shoot Out Gunslinger Spins.

Now we jump into the Deadwood’s hot spot, the Shoot Out Freespins. To activate this bonus, the player needs to land both Sheriff Badges and three Scatter symbols at the same time. It is a combination of both features, Shoot Out makes sure that all the low symbols in the middle are converted to Wilds and then it comes down to your choice between already mentioned Hunter and Gunslinger Spins. This feature can have a massive payout.

Deadwood is a fantastic follow up to the Tombstone slot. Every aspect feels remastered and polished. Nolimit City seems to have a knack for making solid western slots. This game might not overtake the top spot for the wild west slot, but it is a promising and a respectable opponent. We would have loved to see an even bigger max payout increase on Deadwood compared to the one on Tombstone but still, the slot brings a fun experience and surely will attract few regulars.

Enter the mysterious Voodoo shop. Many oddities and mysteries await you, will you take up this challenge? The reward for it is 25,000x!