Prepare to be elated to the next level, the well-known software provider iSoftBet has come out with a new title called Euphoria, this is their third instalment in the Extreme Pays series so it is looking to make a strong statement.

Gleaming purple skies is the theme, accompanied by a mysterious, almost synthetic like soundtrack, iSoftBet is presenting an interesting view to their version of what Euphoria is. Euphoria provides quite a unique trip into its stary nebula with a search for the brightest gemstones. With 5 reels, 3 rows and 243 paylines good action is almost guaranteed. High volatility and multiple bonus features will surely grab your attention on this one. Let’s take a look at all the aspects of the game first, before making an overall judgement.

Like mentioned before, Euphoria is following a pretty classic structure with 5 reels and 3 rows. Euphoria has on offer 243 paylines with bets ranging from 0.30-30 EUR, all in all a pretty decent amount. Max payout is most impressive, stretching out to 20,000x from your initial bet.

Starting with the lowest game symbols, we have four royals followed by gemstones, coloured orange, green, purple, blue and the top one being the glistering diamond, that can pay out up to 13.3x from the players bet when hitting the five of kind.

The big talking point on Euphoria are the Wild symbols, we have two of them, the regular wilds that substitute for all symbols except the Bonus, and the Wild Star symbols, that activates a multiplier. These said multipliers can multiply themselves up to 243x.

Volatility is high on this one, combined with 95.99% RTP, Euphoria can make a serious statement and its possibilities shouldn’t be underestimated.

There are two main bonus features on the slot, the first one being the Euphoria Spins, that can trigger randomly at any point of the game while making a spin. This feature becomes active when the player hits three of the Wild Star symbols, the multipliers from these Wild Stars can interact with themselves and go up to 27x. The current multiplier will be tracked on the upper right corner.

The other one, and safe to say the main feature is the Free Spins. As it is in many other games, also here the magic number is three, players need to hit three Euphoria Bonus symbols which need to land on reels one, three and five which in place will grant you 8 Free spins. Any extra Wild Star Symbols that appear on your screen at the time of the bonus increase the overall multiplier for the win, respectively, a Wild Star Symbol with 2x will activate a 2x win multiplier, same thing with 3x. As mentioned before, on Euphoria multipliers multiply each other, so it is possible to go up to 243x on your bonus, pretty serious stuff. 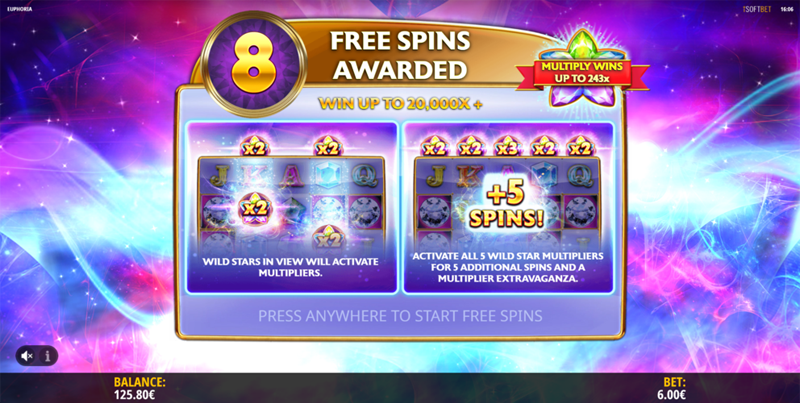 Now, if players manage to activate all five Wild Star Multiplier Symbols, additionally to those 8 free spins, you will be rewarded with extra  5 more and of course an increased multiplier value. Overall the bonus features are fairly simple, although they might be a bit more complex to beginner gamblers at first.

If you are short on time or you simply love quick action packed experience, then Euphoria slot also has given gamers a chance to straight-up buy the bonus. This has become quite a trend on many new slots and it definitely adds another capacity to the whole experience. Bonus costs 100x of your initial bet, so that’s a pretty standard rate compared to some other games on the market.

Overall iSoftBet has done a grand job on their new Euphoria slot, it may not be a blockbuster and it probably is not going to be their flagship for time to come, but it plays its part well, the game is fairly simple, visuals and the general theme is an interesting one. Game design itself draws some similarities with some of Big Time Gaming titles, especially it has been compared with Opal Fruits a lot of times, is that a good or a bad thing? That probably depends on a personal opinion and preference.

Euphoria slot is a fun and immersive experience, but it would be interesting to see if iSoftBet  can take their Extreme Pays series a step above from this.

San Quentin goes absolutely bonkers, this is the most ambitious slot from Nolimit City to this date and soon you will realize just why.