Big Time Gaming is not the most active provider when it comes to releasing new online slots, but one of the most anticipated titles from the company is finally here – Survivor Megaways. Based on a very popular TV show with the same title, the slot also comes with the ultra-famous Megaways payout system.

By taking a first look at the game and its math model, it’s clear that this slot is not as beastly as we thought – but we don’t mean it in any way negative! On the contrary, the theme of the slot will probably attract a specific group of gamblers, and the gameplay goes in line with its purpose – to entertain with a bit more agreeable math model and a mid/high volatility settings. Therefore it’s made for a larger audience.

As the creator of Megaways pay system, Big Time Gaming is putting it in a good use in the new Survivor slot –  a single spin can produce up to 100,842 Megaways (pay ways). The layout is set with 6 reels and up to 7 rows. The first reel can produce up to 6 symbols, while the rest  - up to 7 symbols.

The game is split into 3 areas – the middle section being an Extra Reel, which gives reels 2 to 7 the possibility to produce up to 7 symbols, while the space in the first reel is covered. This Extra Reel is also the only place where Wild symbols can land, but more on Wilds later.

Game offers 10 regular symbols and four bonus symbols – two Wilds, the Urn and the Scatter. Low pay symbols include standard card values from 9 to A, but premiums are wooden Tiki masks.

All symbols, except the Purple Mask, need at least 3 symbols on the payline (counting from left) to form a winning combination, but the Purple symbol only two. This is also the highest paying symbol of the game which offers 50x bet multiplier for 6 matching symbols. Unfortunately, this is the only solid multiplier of the paytable – the rest of the symbols doesn’t offer nothing much, but we should be used to this as it’s the standard of Megaways games.

When it comes to setting stakes – this slot is rather made for low bet enthusiasts, since the bet range is set from 0.2€ to 20€. While the highest bet is not so high, this is still enough for the majority of players.

All wins are a subject to Reactions feature – during the feature, all winning symbols are taken away from the screen to make room for additional symbols, and hopefully for additional wins.

Two characters (with blue and with red linings) are the Wild symbols – they will substitute for all standard symbols (except for the Scatter and the Urn) to help to land a bigger win, and as we already mentioned, these symbols can only appear on the Extra reel. 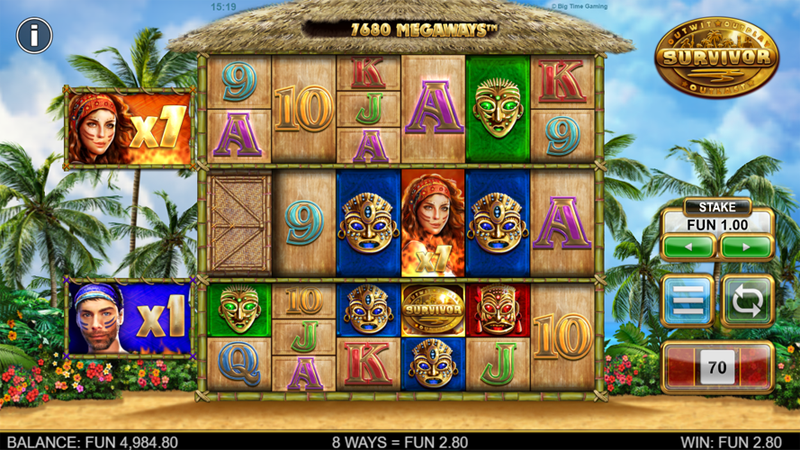 Furthermore, Wilds also hold a multiplier – and the multiplier increases with every Urn symbol on the screen. There are two Urn symbols – a blue and a red one, each of which is dedicated to its color-matched Wild symbol. They come in three sizes and the biggest ones hold a 3x multiplier.

When more than one multiplier lands on the screen they multiply each other's values. Afterward the values of Wild multipliers are reset back x1.

It’s nice to see that Big Time Gaming hasn’t made it difficult to trigger the Free Spins Bonus round – players only need to collect three survivor Scatters and the game will award 15 Free Spins. In the base game, Scatters can land in any position, furthermore, if they land in the Bonus feature, each Scatter will award 5 additional free spins.

The most lucrative Bonus feature is – the Unlimited Wild Multipliers – during the Free Spins, in which the multipliers don’t reset until the feature is completed.

All in all, we stick with what we already stated – Survivor is not the craziest and most action-packed slot from the Big Time Gaming’s collection, but it is definitely a solid one. The gameplay is rather simple – no troublesome and endless collecting of symbols, no game-console like flow of the features. Everything’s out in the open.

Together with 44,000 win potential and exciting theme, we believe that Survivor will survive the test of many gamblers and can easily become the new option for fans that enjoy Big Time Gaming’s Bonanza slot.

If you ever wish to experience that classic slot feeling but with a newer, much more appealing design, then look no further.