The game ensures multiple bonus features and in some markets the Bonus Buy option will be available. Altogether the new Harlequin Carnival slot seems to be festive not only within its theme – well crafted bonus features will probably make you want to join the party!

Thinking about the more festive days of indulgence and cheer, Nolimit City is putting on its best celebratory attire. Everyone is invited to the Masquarade ball with Harlequin Carnival. The slot surely creates the atmosphere of a party a few centuries back completed with Hungarian dance music in the background.

When players enter the party, they need to score at least three matching symbols on one of the 20 paylines to create a winning combination, which are counted from left to right.

Taking a look at the paytable - low pay symbols are beautiful golden aces with payout multipliers from 3,75x to 4x for five matching symbols on the payline. Premium symbols are the guests of the party with different masks, one even with a plague doctor beak-like mask. Premiums pay out from 5x to 15x times the initial bet for 5 matching symbols.

The most valuable symbol of the slot is the red and black harlequin Wild. Although the multiplier value is the same as the highest paying standard symbol – 15x, it comes in 1x3 size and is a part of the xNudge feature. Keep on reading.

In the base game, a 3-row high Harlequin Wild symbol can appear on any reel. If the symbol lands partly on the screen, the Harlequin Wild will always nudge to be fully visible. If you have spent some time playing other Nolimit City games, you probably have seen it in Dragon Tribe slot and already know what we are talking about.

Basically, xNudge feature gives the opportunity to create more wins by pulling down the Harlequin Wild, since the Wild substitutes for all other standard symbols in the game and takes up a whole reel.

Furthermore, each nudge increases the Wild multiplier by 1x. This means that every step or position that the ‘nudged’ symbol falls to reach the base of the slot screen gives a multiplier. If there are more than wilds on the screen, the game will count the total Wild multiplier on the line, which can surely contribute to some huge wins!

Also, by landing the Harlequin Wild, the game will trigger a respin. 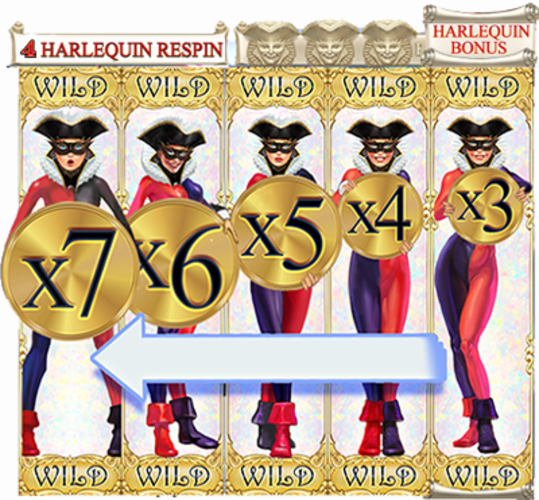 All Harlequin xNudge Wilds will walk to the left and award a respin on the other reels, up until it reaches the first reel. If additional xNudge Wilds land on the screen, the feature will apply to all of them!

Only during the respins, Scatter symbols can be collected to activate the Harlequin Bonus.

Three Bonus Symbols aka Scatters will award the player with 8 free spins, during which the game guarantees a Harlequin xNudge Wild on the 5th reel with a x3 multiplier. Also, the multiplier will increase witch each step the Wild symbol takes while reaching the leftmost side of the slot.

During the feature, if the player is lucky enough to collect three additional Bonus symbols, the game will activate another xNudge Wild on the 5th reel. Each Bonus symbol will also award an extra +1 free spin.

For the most impatient players in some markets, the Bonus Buy functionality will be available, which allows the players to buy the Free Spins bonus round for 70x times the bet.

Nolimit City has quickly become the master of high volatility slots! Although this slot is a bit on the mellow side comparing to its brothers Barbarian Fury and Dragon Tribe, it’s a game worth checking out! We love the xNudge feature which helps to land some bigger wins in both the base game and the bonus round. Plus the Bonus Buy option is not as expensive as it could be, so if your local regulator allows it, you can skip the anticipation and get right on the bonus track.