Play for money at Cloudbet

The show of Play’n Go must go on! Casino software developer releases yet another musically-branded slot called Testament. The theme is based on thrash metal bands’ Testament 2012 album “Dark Roots of Earth”. Get ready to rock the reels with high volatility and multiple bonus features!

Where to Play Testament Slot? The slot symbols are the key elements that hold the theme together. All low pay symbols are standard card royals from J to A shaped in a Testament band’s logo font, but high pay symbols are iconic images from the thrash metal scene, paying from 2.5x to 12.5x times the initial stake for 5 matching symbols.

Wild is the most valuable symbol – it pays out 15x the stake and also substitutes for all other symbols except the Scatter. 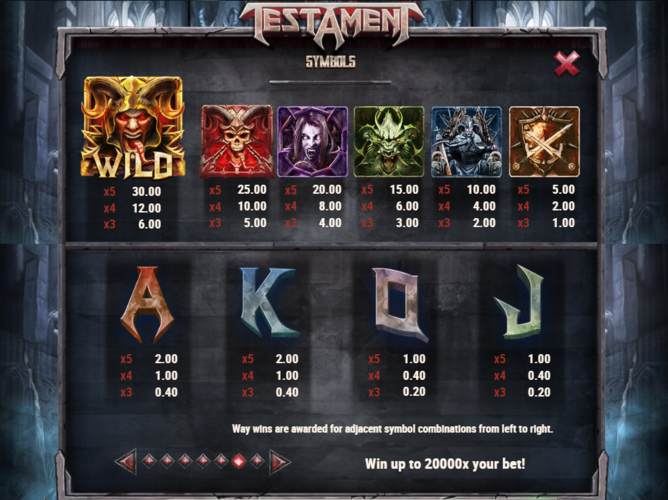 Winnings are counted for adjacent symbol combinations from left to right. The game is set with a default layout of 5 reels, 3 rows and 243 win ways, but the win ways can go up to 2400 during the bonus features. Overall game potential is 20,000x times the initial stake.

The slot offers three bonus features, including wilds, and two types of free spins. The Scatter will take you up to bonus features, the symbol itself is shaped according to the theme – as the Dark Roots of Earth album cover image. Let’s break down the features one by one.

It’s all about the music, therefore Play’n GO presents two Song Features, which are triggered by landing 2 Scatters on the reels. When the feature is triggered, the player receives three free spins combined with one of three features:

Cold Embrace – all wild symbols that land on the screen will be locked in their place until the end of Song free spins. 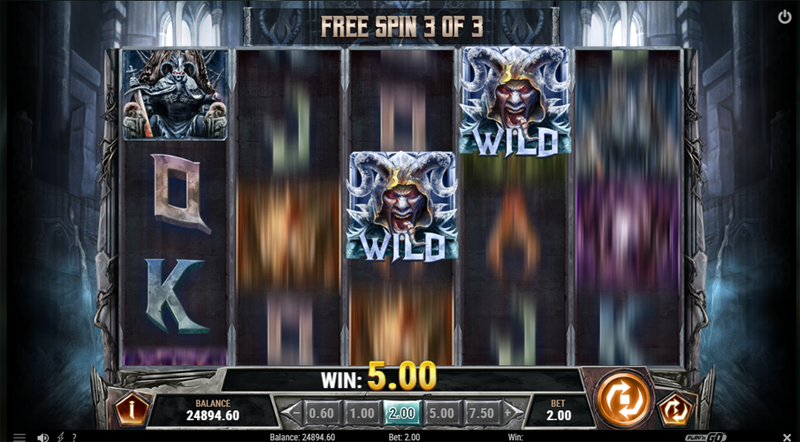 Dark Roots of Earth – Skull, the highest paying symbol, will take spread taking over symbols up or down the reel. 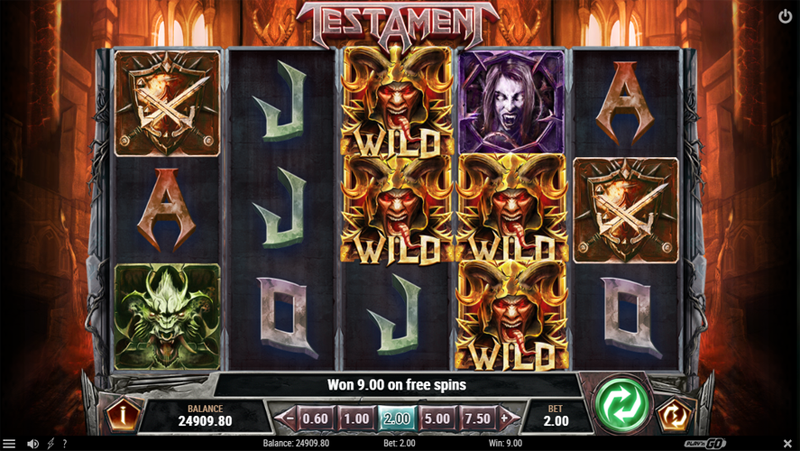 Throne of Thorns – during this Song feature, the grid will expand from the default layout to 4-5-6-5-4 symbol placement, increasing the count of pay ways nearly ten times – up to 2,400 pay ways in total. 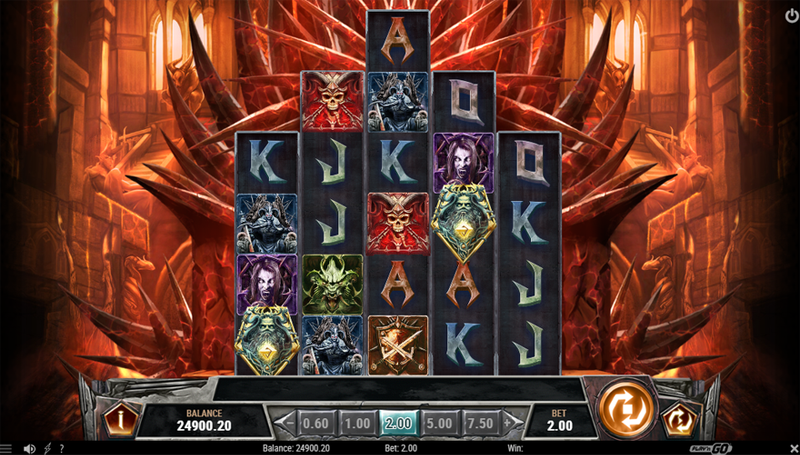 Rise Up Spins bonus is a more voluminous bonus round, which is triggered when 3-5 Scatters land on the reels. If the player manages to land 4 or 5 Scatter symbols, the game will randomly award 4x or 20x multiplier.

Once the bonus feature is triggered the player will receive nine free spins; also the reels will expand to a set of 4-5-6-5-4 symbol placement.

Nine spaces at the top of the grid will be blocked off with stone blockers. Each time a Scatter symbol lands on the reels during the feature, one stone blocker gets smashed to expand the layout. If the player manages to smash all stone blockers, the game activates Testament Spins. 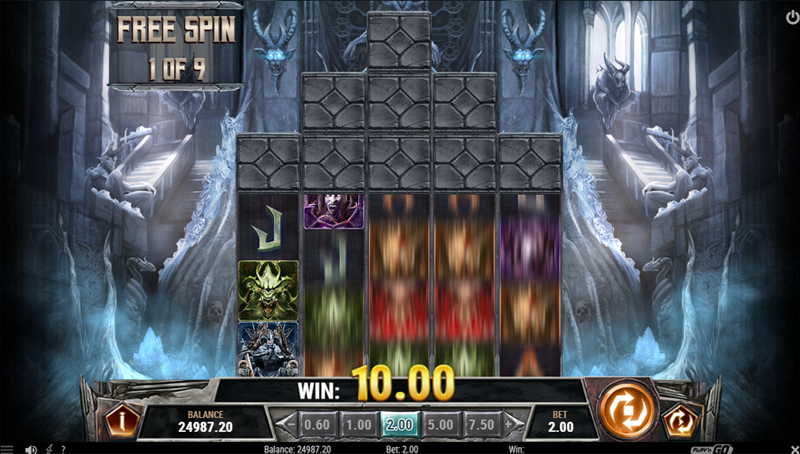 When entering the Testament Spins bonus round, the player will receive additional three free spins that will sum with the remaining number of Rise Up spins.

In Testament Spins all three Song Features are active – Wild symbols are locked on the reels and they will also spread across the reel. 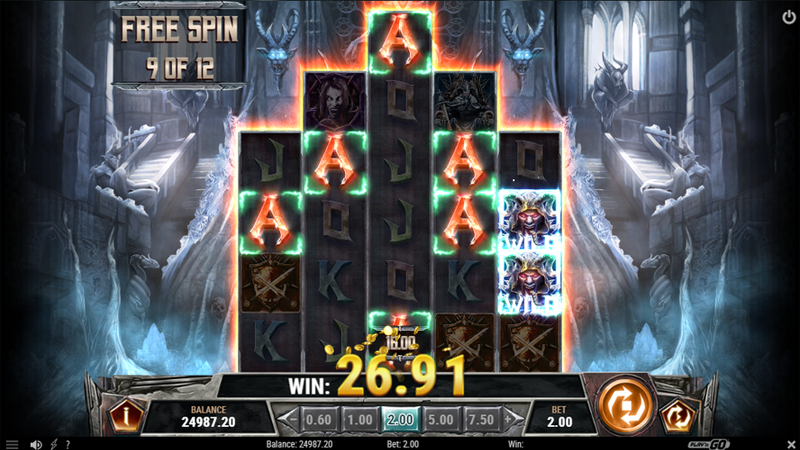 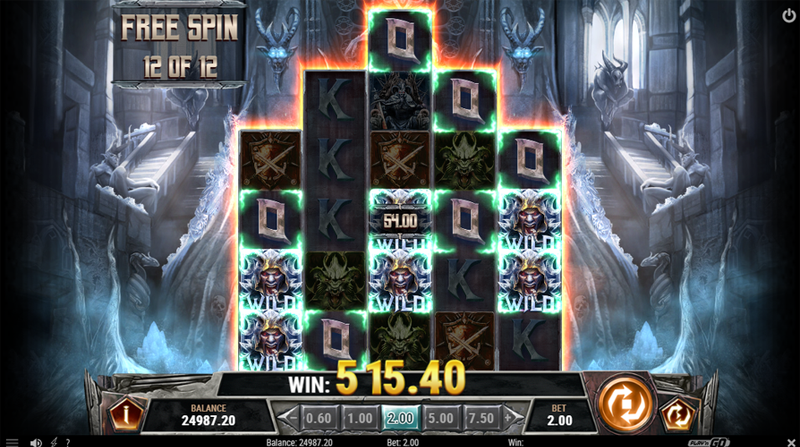 Play’n GO has created a great slot, that definitely rocks the reels! Multiple bonus features, great theme and the winning potential of 20,000x times the stake. The most lucrative bonus round is, of course, the Testament Spins that combines all other bonus features of the slot. If the player manages to get to the end – he/she can expect some splendid wins!