Play for money at AmunRa Casino

The battle is joined by four great figures: Thor (Norse god of thunder), Wukong (The Monkey King from Chinese mythology), Athena (Goddess of wisdom and war from Greek mythology), and Anubis (the Egyptian god of death). When in bonus round, the player can choose a character and become a fighter himself/herself to join the battle against the other three. The four fighters also take the part as high pay symbols in Divine Showdown slot, Thor being the most rewarding (16x times the stake) from standard symbols. However, the combination of five Sword Wild symbols will multiply your bet by 20x. Wild symbol substitutes for all symbols except Scatter.

Low paying symbols are the usual card values from 10 to A. All symbols are beautifully crafted and suits well with the theme of the game. 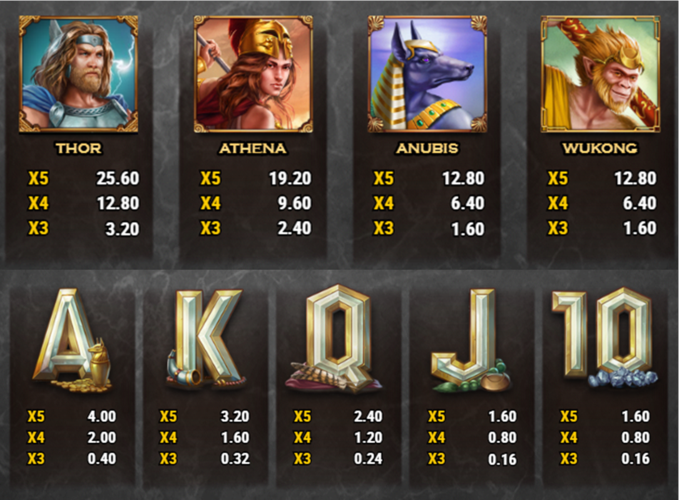 Divine Showdown is 5 reel, 4 row and 20 payline (fixed) slot, which pays from left to right.

Multiplier Reel: a multiplier between 2x and 10x can apply to any spin in both the base game and Power Spins bonus round. The Multiplier is located above the reels and opens randomly.

Appearance of a God: any God’s power can be activated at any time. Thor will replace all other high-pay symbols with the Thor symbol; Athena will synchronize three reels; Wukong will transfer 1-2 reels into wild reels, but Anubis will turn all instances of 1 or 2 symbols into wilds. Furthermore, the Multiplier Reel can be active during these Power Spins. 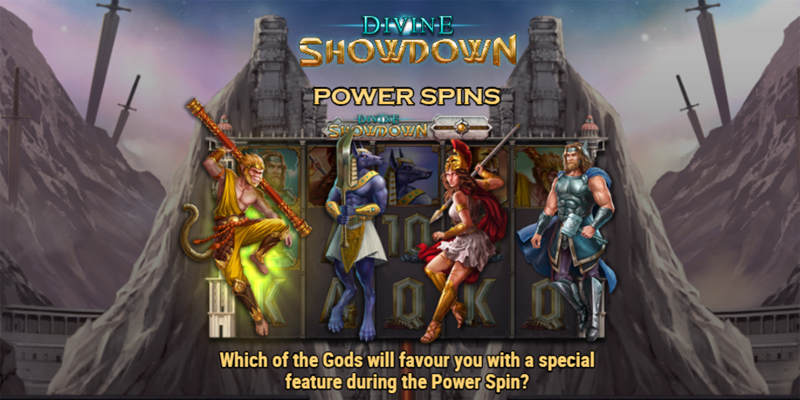 Free Spins bonus round in Divine Showdown slot slightly creates the feeling of playing a console video game – when 3 Scatters lands anywhere on the screen, the player will be awarded with free spins. But first, the player has to choose a warrior from four Gods to play in battle. 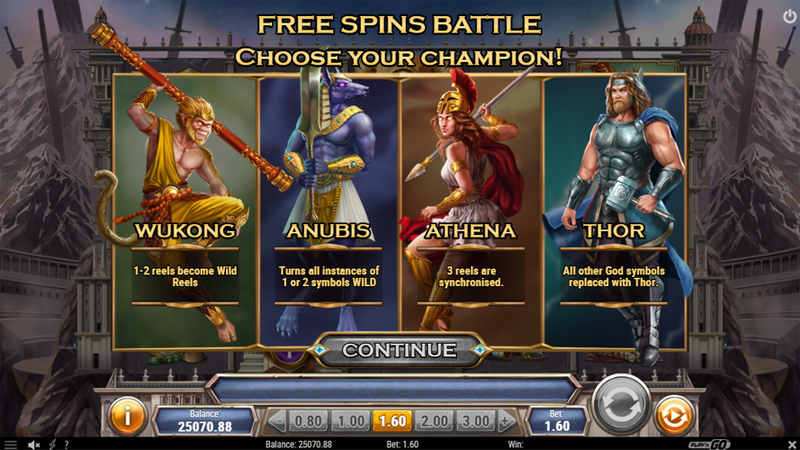 During free spins, Power Feature will be active, as well as the Multiplier Reel. The player starts with 3 lives. After choosing the fighter, the game will spin The Battle reel to decide if the player will enter the Free Spins bonus round or will join the battle against another God.

When in battle, game screen is taken over by Power symbols of each battling God. The God who has the most symbols wins the battle; this fight decides the action of the next free spin – winning Gods’ power will be applied.

If the player loses the battle, a life is subtracted and the next spin is dedicated to opposing Gods’ power features.
Free Spins bonus round ends when all lives are lost. 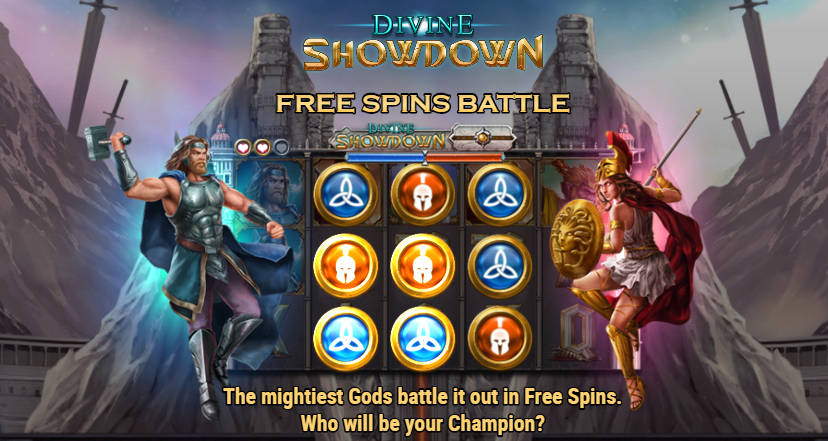 Divine Showdown is a beautifully crafted video slot and Play’n GO has managed to create a very captivating storyline. Not only it is visually very appealing, it can also bring some great wins to high volatility slot fans. With such combo of max win exposure, high volatility, and action-packed bonus rounds, mythology theme fans will be glowing.

Zeus, Athena and Hades have gathered to stand against the monstrous Medus, Cyclops and Harpy. An intense clash of gods and monsters.