Intense sword fights, a lot of action and a little bit of sorcery awaits in the new Conan slot from NetEnt. Conan has been around for a long time in books, comics and television, and now it conquers the world of online casinos.

We’ve been waiting for this moment for several months now – in February 2019 NetEnt announced the release of Conan slot, but it took almost 7 months till we finally can place a spin a give the action-packed slot a try. NetEnt themselves describes Conan as their big release; well, let’s see what this game has to offer. 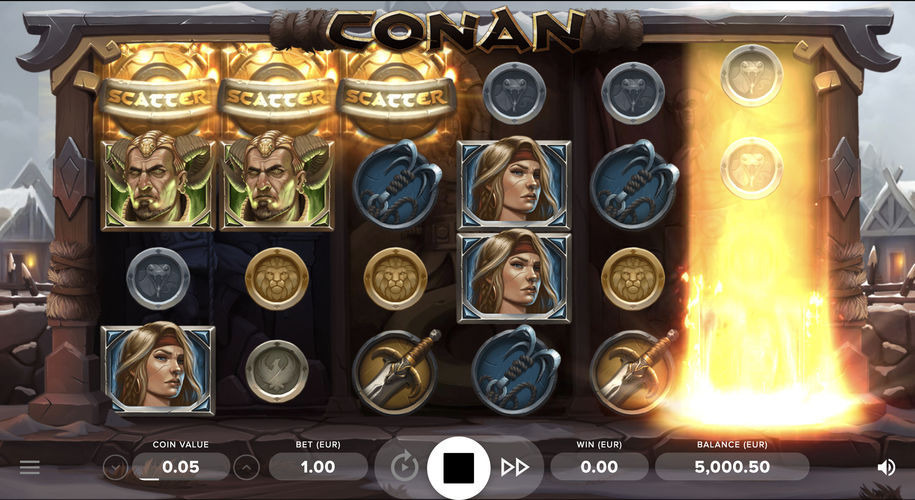 In the background you can see reels being divided in three sections: 1st and 2nd reel in one section, 3rd and 4th; and 5th and 6th in the following. Each section links to a different bonus feature. Let’s start from the first left-most area.

Tower Wilds can only appear in the first section: on the 1st and 2nd reel. As usual – wilds will substitute for all symbols to help make some greater wins, excluding scatter symbol. Tower wilds are expanding symbols, that can cover the reel partly or fully.

Reels 3 and 4 are giving the most lucrative bonus feature in the Conan slot. If the player manages to land mystery symbols in the second section, the game will randomly choose a symbol (excluding Scatters and Wilds) and the mystery icons will transform into matching symbols.

Also, the mystery symbols can be both single and stacked. Landing a fully stacked symbol on 3rd or/and 4th reel in the main game will activate the Mystery Multiplier from 3x to 7x. Furthermore, in this case if you land stacked mystery symbols together with any wild symbol, the game will trigger the Thoth-Amon feature giving 3 to 6 mystery symbols on the reels. 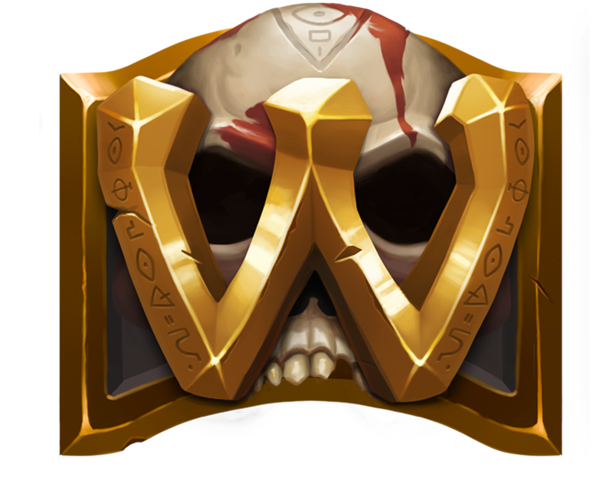 The last section – reels 5 and 6 – is dedicated to expanding Battle Wilds. These symbols can expand up to 3 positions sideways to adjacent reel.

And last but not least – free spins bonus is bringing three bonus round variants with different volatility levels. To trigger the bonus round, you will have to wait for 3 to 6 scatters to appear on the reels, which will give you 10 to 50 free spins, depending on how much scatters landed. 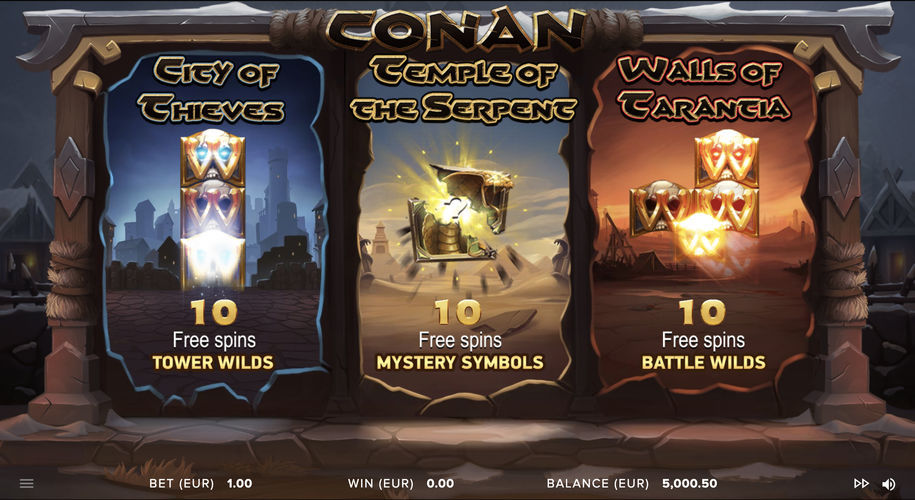 Each time the free spins bonus round gets triggered, three bonus modes will be offered to the player to choose one from the following:

◆ City of Thieves – free spins bonus round with low/ medium volatility. Here full attention goes to Tower Wilds, that can expand over the reels entirely or partly.
◆ Temple of the Serpent – volatility level: medium/high.  In this free spin round Mystery symbols can appear on the reels. They will work the same as in the base game, with the possibility to trigger multipliers and Thoth Amon feature with additional mystery symbols.
◆ Walls of Tarantia – volatility level: low/medium. Here Battle Wilds will take on action, also working the same as in the base game. Battle Wilds can expand to take over 3 symbols sideways.