This winter we have seen some of the biggest snowfalls in the last decade. While everyone’s mind is filled with frosty thoughts, Rabcat want to take us somewhere sunny and warm. Welcome to the island of Tropical Wilds. This Spiffy slot is a real joy for the eyes and it shouldn’t come as surprise, because Rabcat are responsible for the visuals of such video games like Fortnite, Overwatch and Valorant. If you know a thing or two about gaming you should be impressed. But visuals alone don’t win over hearts of gamblers, so let’s see how this slot stacks up against some industry giants.

This is not the first Rabcat appearance on our review board, as we have had an experience with Mining Fever, which was a very tame slot. Since then, Rabcat have had plenty of time to draw some new ideas and conclusions, so we can now enjoy a game with much higher potential and arguably more immersive visuals. Rabcat is also not a weekly provider, meaning that they tend to release slots with quite a big time gap between them, which the quality reflects. Powered by Microgaming, they now are introducing the world to Tropical Wilds. Tropical Wilds comes with some tropical music (go figure). Although our first idea that came to mind is Crash Bandicoot, if you have played this classic video game then you probably understand what we are talking about. We can also hear the sounds of the waves and some seagulls in the background. There is also a visible volcano and some palm trees. Overall, the atmosphere is very positive and jolly, so in case you’re feeling down, you found the right spot to be in. Tropical Wilds slot comes with 25 paylines which are played out on the 5 reel 3 row layout. 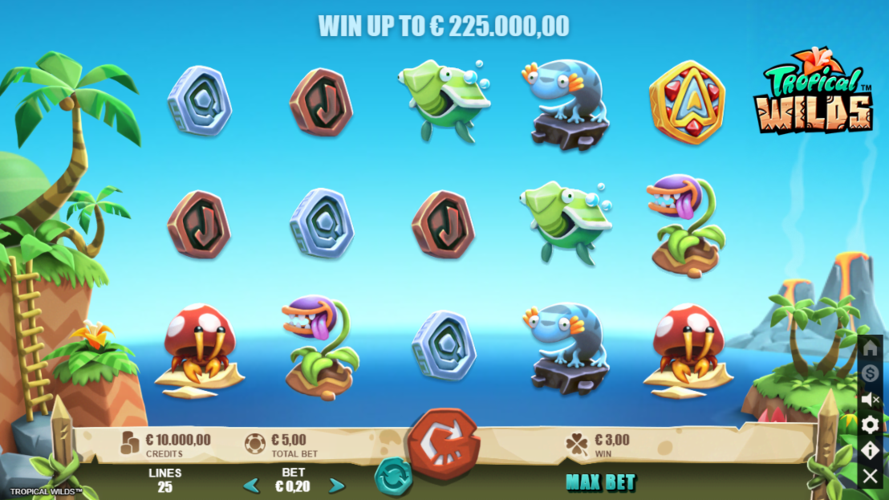 The gameplay flows very smoothly as you spin away the nicely designed 3D symbols. Besides wilds, Tropical Wilds slot comes with 4 low-value symbols and 5 high-value symbols. On the low end, we get our J’s, Q’s, K’s and A’s styled as wonderful coins/tokens. The higher-end features bunch animals and creatures of the island, such as Crab, Turtle, Toucan and others. Some sort of carnivorous plant is the highest paying regular symbol, equaling values of wilds. Even the game’s UI is super polished and detailed. We doubt that this slot was a rushed project.

Even though Tropical Wilds has stepped up from the previous release, the math model still is quite gentle. Of course, it wouldn’t really make sense if such a laid back slot came in with a hardcore attitude, hence this slot is more for the casual gaming. Tropical Wilds is a medium volatility slot with an RTP of 96.47%. Tropical Wilds can pay up to 3000x. For a medium volatility slot, this is a pretty fair number. This Microgaming powered slot will be available on all devices with a choice of bets between 0.25 and 75.

The name of the slot gives away one of the core elements of the game. Gameplay heavily focuses on wilds, which we have plenty of. Wilds don’t drop the same way, as usual, instead, they are located inside a Mystery Box. This Mystery Box drops as a random symbol, containing one of the following wilds.

• Regular Wild – Name speaks for itself. This is a regular wild as we usually know it.
• Boost Wild – This wild comes with a multiplier of 2, 3 or 4, depending on if you receive 1, 2 or 3 wilds respectively.
• Outburst Wild – Single wild will duplicate itself, taking a spot on the grid which maximises the winning amount.
• Tornado Wild – This is just like a jumping wild, which moves by one cell on every spin. The direction is random and can be horizontal and vertical. If the wild jumps of the layout then it’s effect comes to an end.
• Pathfinder Wild – Special effect is triggered by 2 or more Pathfinder wilds. These 2 or more wilds will connect themselves, adding additional wilds on the path. 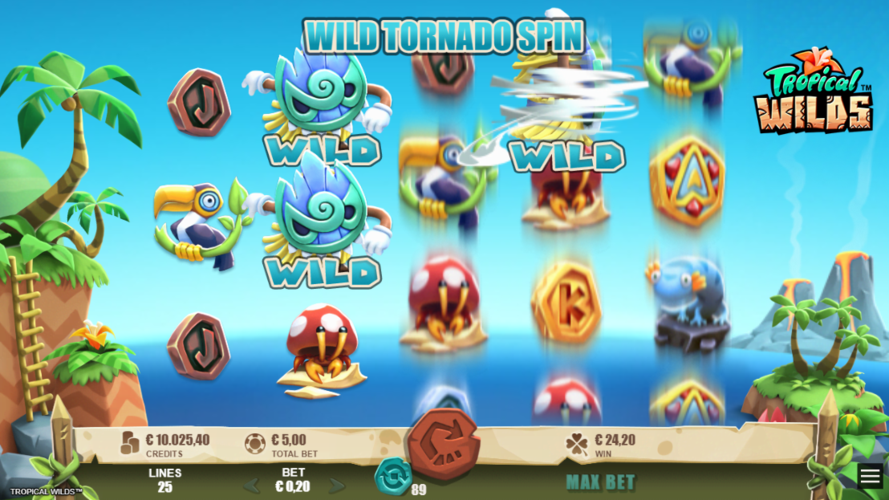 Rabcat also managed to squeeze in some Free Spins into Tropical Wilds. For 3 scatters you are given 8 Free Spins, no more no less. Before the bonus starts, one of four wild variants will be selected (Boost Wild, Outburst Wild, Pathfinder Wild, Tornado Wild). Afterwards, this randomly selected wild appears on every single Free Spin. Unfortunately, re-triggers are not possible.

Rabcat is one of those providers which we would like to see more from. Combining the strength of Microgaming and the creativity of Rabcat we get some really delightful slots. The only problem so far has been the math model. We would love to see much bigger potentials and more frequent payouts. The fun part of the game is there, it’s some of the core values that are lacking. With that being said, we believe that Rabcat can make a bigger name for itself in the gambling industry, it all comes down to their own commitment. Meanwhile, we will enjoy Tropical Wilds with hopes of something more impressive in the future.

Summon your inner explorer and head down to the deep mines that hide wonderous treasures. Wild Drops is not all that it seems.