Quickspin are teasing us with a shiny April release called Midas Coins. This slot takes place in Ancient Greece, which is the original birthplace of King Midas. The legend goes, that everything Midas touches turns to gold, so we can expect some glittering riches made just for us. Some of the King’s possessions are objects such as rings, necklaces, earrings and more, which we all will have a chance to earn. When everything is covered in gold, it’s hard to resist.

5 reel 25 line layout might suggest that Midas Coins is a slot with a classical feel, but this is Quickspin, so you know that nothing is so simple. Greek mythology is a very common slot theme, and so is the character of King Midas. He is synonymous with gold so it makes perfect sense why he is such a recurring character. Time to turn some things into gold.

It’s a sunny day in Greece. The skies are clear and a light breeze goes between the trees. The Midas Coins 5 reel stone layout strongly stands in the middle. On the left side, we can spot a couple of marble pillars. This could be the Kings courtyard for all we know. The music also creates a wonderful Mediterranean atmosphere. It’s a minimalistic, yet surprisingly attractive presentation. To be honest, we didn’t expect anything less from Quickspin. 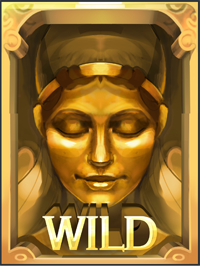 The 8 regular symbols are played out on 25 paylines. Lows are considered Jacks, Queens, Kings and Aces while Mediums are Pendants, Rings, Bracelets and Necklaces. This is perhaps not the best visual performance from Quickspin, because these symbols are quite basic. Marigold, the daughter of Midas, is the Midas Coins slot wild symbol. There are also 4 coin symbols that come with different multipliers. The lowest coin can provide 1-5x, while the biggest coin is capable of multipliers up to 500x, so besides the scatters, these too are important symbols.

If you make a slot about King Midas, the sole focus is gold and wealth, that is also why the payouts should be matching. It’s far from being one of the most extreme Quickspin slots, but for what it's worth the payouts are appealing. Volatility is medium and the RTP is 96.02%. So far Midas Coins walks the middle ground. King Midas seems to be generous to us because max win can reach up to 5,000x. These in general are some of the most balanced and fair payouts we’ve seen in a while. Midas Coins bet range is 0.25 – 100. This slot can be enjoyed on all devices.

We touched upon the coin symbols a bit already. These multiplier coins can be collected with the Midas symbol, which lands only on the 5th reel. Coin Collect feature is a simple addition, but it plays a major role in Midas Coins.

To take it up a notch, the best bet is to trigger the All is Golden Free Spins. To do so, you will need to land 3 Satyr Scatters. Satyrs are interesting creatures in Greek mythology. They are usual half-human, half-animal. Always drunk and in most cases hideous looking. This is not entirely the case with Silenius, the oldest of Satyrs. During Free Spins all coins will be collected on the left side. Coin Stack starts with a 3x. This time Midas collect the whole Coin Stack, but the stack doesn’t reset, meaning that you can grow it and collect it simultaneously. Midas Coins players start with 12 Free Spins, but more can be added with extra scatters during the bonus. 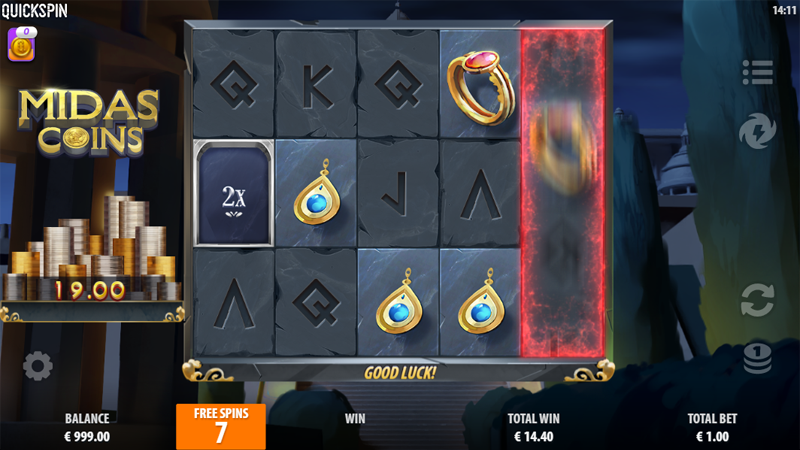 To get instant access to these Midas Coins Free Spins, Quickspin have provided a Buy Feature. This costs 50x of your bet.

This is not our first trip down to Ancient Greece but it somehow still feels quite refreshing. The Coin Collecting mechanism also isn’t something that we haven’t seen before, but it is always fun If it's presented in a great fashion. The generosity of King Midas can extend up to 5,000x, which makes the potential on Midas Coins great. Quickspin took an old recipe and made it beautiful and simple and the same time, which is much harder than it seems. There Is something especially satisfying in watching that coin stack get bigger and bigger. With Midas Coins, you’ll feel like a king on top of a golden hill.

Professional darts player Peter Wright will show you how to shoot some wins. Crazy colours and style all inside Snakebite slot.

King Arthur’s enemies have stolen the realms precious gems. Will you seek the King’s reward, or will you take the diamonds for yourself?