Greek culture has strong roots in the world of slots. Red Tiger have decided to have another go on this theme, this time pitting two gods against each other. Brothers Zeus and Hades might have fought hand in hand before, but their differences now have become unbearable, so the god of the sky and the god of the underworld have declared a war against each other. Red Tiger might as well had named their slot Zeus vs Hades, but in the end, they went with a more poetic approach, so welcome to War of Gods.

One of the latest slots that come to mind is Artemis vs Medusa, where the goddess fights against the vile snake-haired gorgon. War of Gods takes a different approach, as you now can pick your side, instead of just always being on one. War of Gods is also the first release of 2021 for Red Tiger, so the game should be made well so the year can start off on a positive wave. Let’s see what result will this mighty encounter produce.

After the splash screen, we are thrown into a world that is ravaged by the war. The location is not totally clear, but these seem to be fires, that come from the underworld. Lightning of the Zeus covers the dusken skies. War of Gods game layout is made from shiny, highly decorated gold. The background music is surprisingly positive, taking into consideration that we are in the middle of a war. The War of Gods splash screen might have you second-guessing, but when you open up the game, it straight away has that classical Red Tiger slot feel. 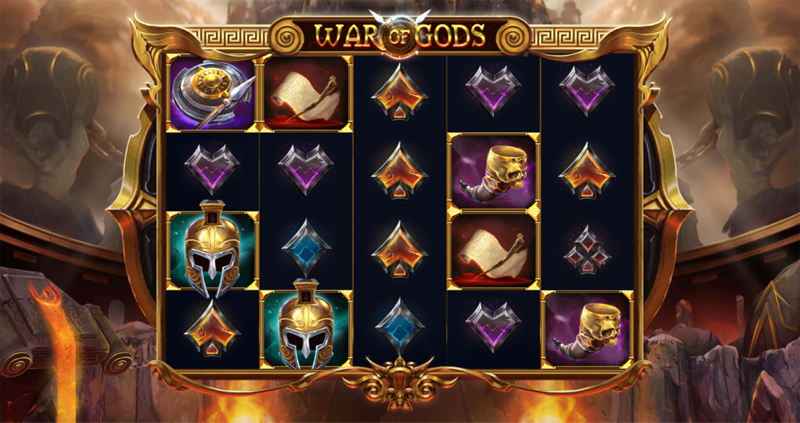 War of Gods comes with an interesting selection of symbols. Eight of them are regular ones, which are then further split into lows and highs. It actually took an extra second to notice, but the low symbols are nicely styled as card suits, with spade being the most valuable. War of Gods high symbols are a parchment, skulled horn, shield with spear and war helmet, which pays 300x for a full line of fives. Additionally, we have 8 special symbols of Zeus and Hades, although these are only used during the bonus feature phase. There is no wild symbol on War of Gods

The battlefield has been extended by 1 row, which also comes with an increased amount of lines, 60 to be precise. Intense battles require an intense math model, so War of Gods, of course, is a high volatility slot. There are two main downsides to the math model of the War of Gods. First, the RTP of 95.66% is on the low side while the max win potential barely reaches 2,518x, which for such an epic tale seems so underwhelming. Perhaps, we are too used to the great potentials of Red Tiger Megaways, but still, we believe most of you will agree that this payout is also on the low side. War of Gods can be played on all devices with a betting range of 0.10 – 20 EUR/GBP.

Besides the absence of wilds, Free Spins also don’t make an appearance on War of Gods, instead, we get 3 different bonus modes. To get these, you need to land special Zeus/Hades symbol on the first and fifth reel. 2 Zeus symbol trigger the Wrath of Zeus feature. During this War of Gods feature, only symbols that appear are the high-paying Zeus symbols. On the opposite, landing 2 Hades symbols triggers the Hades Hellfire, where, you guessed it, only high-paying Hades symbols may land.

During Wrath of Zeus, you can land up to 3 Upgrades symbols which increase the value of Zeus symbols. Wrath of Zeus features is active as long as new Zeus symbols appear. For Hades Hellfire, the special addition is the Expand symbol. This symbol expands the War of Gods grid up to 7 reels and 6 rows, this is when the full 60 lines can be utilized. The expanding game layout also expands the Hades symbols, granting an additional value.

Last but not least, both Zeus and Hades together trigger the Warring Gods feature, where only Warring Gods symbols appear. This is the ultimate War of Gods bonus feature, as it combines the best of both worlds, providing effects from both previously mentioned bonus features.

War of Gods creates some mixed feelings. Overall, the theme and the visual effects are really good, definitely following the standard that Red Tiger have set so many times before. An idea of two gods having a mighty clash can create an epic story, but Red Tiger dropped the ball. Quite frankly, the sole problem is the War of Gods slot’s stats, which, as we said before, are underwhelming. The RTP and the general frequency of the wins is quite low and so is the max payout. Bonus features don’t come easily and once they drop, a huge win is not guaranteed. War of Gods is a tale of two cities, the presentation is wonderful, but it’s held back by the tame payout stats.