Play Cat Wilde and the Lost Chapter Demo for FREE!

The daughter of the famous explorer is back for another round. Seems like Cat Wilde has taken the torch as she is becoming a more prominent figure around the newer Play’n GO slots. The new adventure is called Cat Wilde and the Lost Chapter. Of course, the main question for a lot of us is, how different the new journey is from the original one – The Doom of Dead. Visually, both games are awfully similar, Play’n GO have once again gone with the Egyptian theme, which leaves some of us a bit divided. In the past, Play’n GO have made some masterful slots using this setting, but we are now starting to reach that point where it’s getting too abundant.

If we take a look at some other areas of the game, then we will also find a lot of similarities. But some important aspects have been improved, such as the doubled max win potential, which is now 10,000x. Is Cat Wilde and the Lost Chapter a good standalone game or is it just a cheap remake of the original title? We will try to find the answer to that question.

Where to Play Play'n GO Slots?

Cat Wilde and the Lost Chapter shares a strong resemblance with The Doom of Dead. If this is done purposely or just due to laziness is not known, but things like logos, game layout and few symbols are very closely related. The action happens in some sort of tomb, so we are looking at that classical Book of Dead kind of design. The choice of music is a little bit strange too, as it is quite intense, like an action movie, as opposed to portraying the theme with a more Ancient Egypt vibe. Lost Chapter also runs more smoothly, so overall the experience is slightly better.

Although very familiar, Cat Wilde and the Lost Chapter looks better. All the small details, such as the spin button and outer lines are much more defined and overall the game just looks a lot crisper. This also applies to the game symbols. We once more have 9 regular symbols which are combined on 10 paylines. Low ones are made up by 10, J, Q, K and A, while high-value symbols are Scarab, Ankh, Anubis and Cat Wilde as the highest of the regular bunch. Additionally, we have the Wild symbol which has the same value as Cat.

As another “Book of” type game, Cat Wilde and the Lost Chapter offers Free Spins as the main prize. All these Egyptian book games are renowned for the Expanding Symbol feature, which also here is the backbone of Free Spins. Blue pyramids are the scatters of the game. The award for three or more is 8 Free Spins. During this bonus, a new expanding symbol is picked on every spin, as opposed to just 1 as usual. Just like before, these symbols expand to cover the whole reel. Additional 2 or more scatters award the Pyramid Spins. Award is 4 spins per scatter. The active expanding symbol is fixed throughout all of the Pyramid spins. This feature has no re-trigger limits. 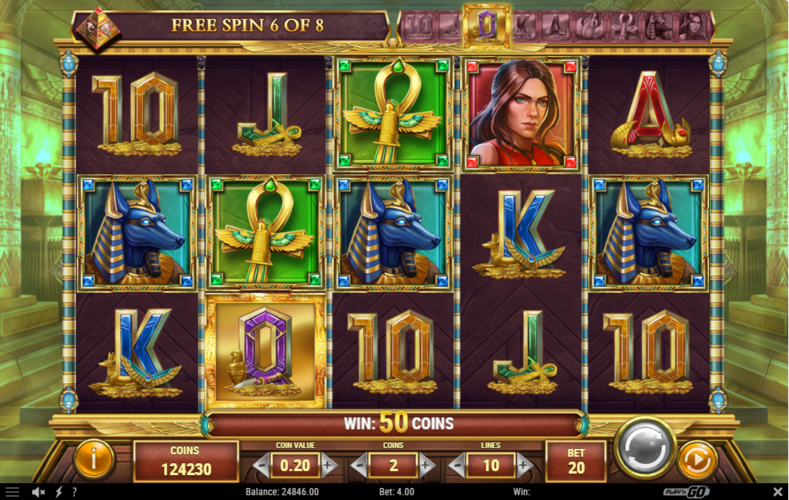 Great American TV show led by David Hasselhoff is making its appearance on a video slot. Be the new Knight Rider!