Christmas Megaways is another slot by Iron Dog Studios that is a part of the branded Megaways series. Just like the original Branded Megaways, also Christmas Megaways offers operators a chance to make the game customizable to their logos and brands. This is an interesting idea, but it needs to be backed up by a strong template which we are going take a look at right now.

Iron Dog Studios have lately been releasing a bunch of Megaways slots. With Christmas right around the corner, it seems like the perfect idea to attach the Megaways to all the festivities. In general, Iron Dog Studios have been very keen on releasing new Megaways slots, but it’s also very understandable as people tend to be very drawn to these type of games. Christmas Megaways is very similar to Branded Megaways they are almost identical by looking at the stats, but of course, the new release is designed to a theme. Let’s see if Christmas Megaways will bring good presents or coal.

Christmas is such a gorgeous holiday. It’s full of decorations, shiny lights, white snow and just, in general, the atmosphere is very cosy. Unfortunately, Christmas Megaways captures this feeling quite poorly, as the visual presentation is bland and just wholly uninspiring. Yes, you see the white snow and a couple of presents, which all look the same but that’s about it. The sky is purple and beautiful, but the Christmas spirit is just not there. Perhaps, the design is simpler, so it would fit the needs of more operators, but still, it doesn’t change the fact that Christmas Megaways for a Christmas slot is rather unwelcoming.

Perhaps the only saving grace for the holidays is the Christmas Megaways symbols. Each lowest symbol (10-A) has a little decoration added to them, while high paying symbols are season themed, such as Christmas tree, gifts, candles and decorations. With the uninspiring presentation at least we have a couple of symbols that help to set a mood. Wilds can appear on all reels besides the first. These wilds can also appear in an x2 for, which is a multiplier. Up to 3 x2 Wilds can appear on the same spin.

If you don’t count the wilds and the tumble feature, which is more of a mechanism, then we are left with a single feature, which is the Christmas Megaways Free Spins. As mentioned before, the tumble mechanism has a straight correlation with the Free Spins. You need to make 4 consecutive tumbles or wins to trigger 8 Free Spins. You don’t need to settle there as each new win after initial four grants additional 2 Free Spins, up to 14. Each reel containing 7 symbols get its height locked in for the eternity of the bonus. Each wins adds a +1x multiplier, which has no limit. During the Christmas Megaways Free Spins, every four consecutive wins add 4 extra Free Spins, with every next tumble granting 2 spins, up to 14. 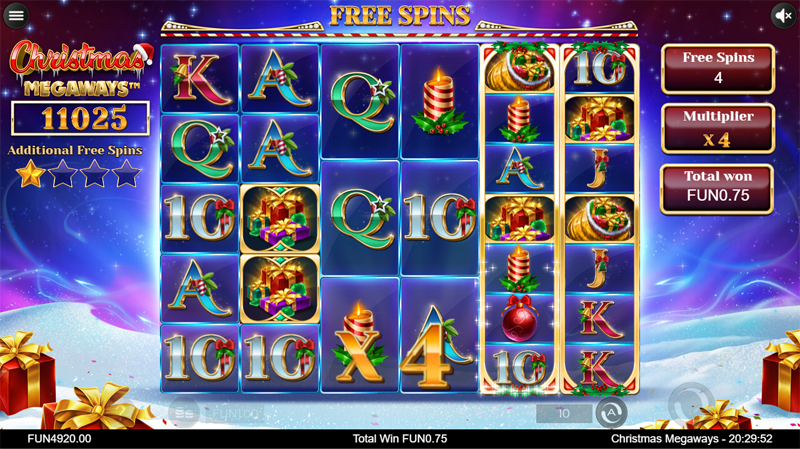 Christmas Megaways Free Spins can also be bought straight up. You have a choice between different spin amounts, so the price range also varies. The lowest price is 30x while the highest price is 130x.

Christmas Megaways isn’t your typical slot. It is made with operators in mind, meaning that it’s made for companies to customize and brand it with their logos. This is exactly the same concept as the original Branded Megaways only now a Christmas theme has been added. Speaking of theme, it didn’t come out in the best way, as the slot feels too cold and unwelcoming, it is definitely not the cosiest Christmas game. On the flip side, the whole build of the game is quite sturdy and good. It’s a Megaways game with a very strong potential, which gets even better during Free Spins. The branded concept is interesting, but for the future releases, Iron Dog Studios have to take into mind, that these slots, in the end, are played by players, not the operators, so a slightly better focus on the presentation would be a good change.