Play for money at Videoslots Casino

Old Norse plunderers set sail for mysterious lands in hopes of finding treasures. Join the Warband and get your share of spoils, like a true Viking does, with slaughter and might. Thunder Shields is a brand new Norse/Viking themed slot by iSoftBet. It is another instalment in their Hold & Win series. It may look slightly cartoony but it should not be taken lightly, as Thunder Shields can be as tough as nails.

iSoftBet are known for their quality, so every upcoming title is almost always big news. Coming in with 5 reels and 4 rows Thunder Shields has just slightly stretched out the game layout. There have been some similarities drawn with Relax Gaming’s Money Train 2, which has been received very positively. Who knows if this was intentional or not, but still, Thunder Shields is a slot that has a lot of qualities on its own, so let get into those.

Where Can I Play iSoftBet Games?

Thunder Shields can be called a semi-serious game. It has some of that classical Viking intensity, but at the same time, the slot is cartoony. Dwelling a bit more on the visuals, it’s not a very clear background. An intensely bright light shines behind the torn curtains. We will leave it up to your imagination what it could be. The Thunder Shields music is also not of the traditional Nordic type, it gives more of an action film vibe. In our opinion, the bonus game screen looks much more appealing, but we will cross that bridge once we get there. Overall, it’s a decent visual presentation, but nothing fantastic.

With symbols of Thunder Shields, you will see some elements of Norse culture, but with a more, for a lack of a better word, cartoony, sort of gamey look. This again is a matter of a preference. For us, it’s an okay look, nothing too inspiring again. Of course, Thunder Shields has regular customers of 10 – A, which have this metallic look to them. The better symbols that you will find are the Vikings themselves, we have 3 bearded warriors and a shield-maiden. Top paying Thunder Shields Viking is especially menacing, his sneer could curdle dairy. Besides the old chaps, we have a mystery symbol, which is two crossed axes and a wild symbol which is similar to the Mjölnir or as it is known more commonly, Hammer of Thor. 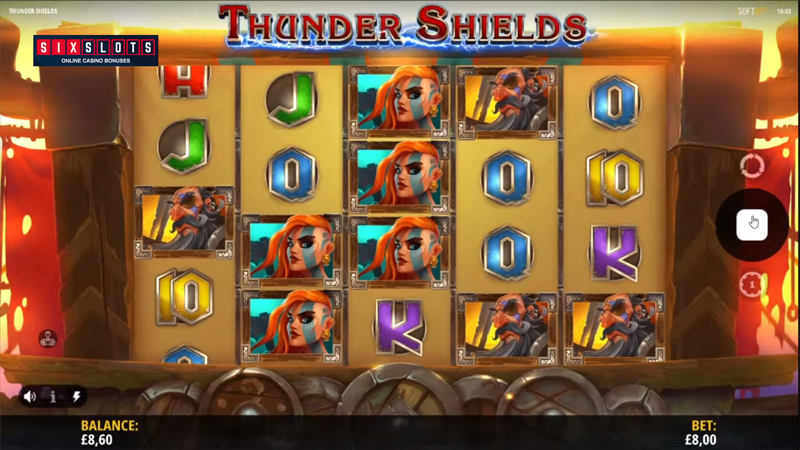 The main focus almost always is to score the bonus feature, but also the main game on Thunder Shields can be satisfactory. Stat-wise the payouts are quite balanced. 40 lines with the medium-high volatility ensure a steady flow of wins. Although, not always the wins are quite exciting as Thunder Shields pushes out a lot of low-value symbol combinations. If things do go right, you can expect a beautiful max payout of 4,000x. Seems like plundering can be beneficiary. Thunder Shield’s RTP is a dead-on average 96% so the playing field is fair and square. For bets, you will be able to decide from 0.40 to 40EUR.

As mentioned before, there are features on Thunder Shields that will keep your main game equally exciting. These sort of additions are more important than some providers like to think, as a constant grind for the main bonus can be exhausting, so it’s good to be treated with a little bonus feature from time to time. First of them would be the Colossal Respins. Every wild triggers a respin, which then comes with a colossal symbol. This huge symbol is in size of two reels, but for every consecutive respin wild, this symbol grows in size, until reaching 4 reels width. If you keep landing wild after that, the multiplier for the symbol grows by 2x. Another Thunder Shields main game friendly feature is the Mystery Spins. Unsurprisingly it involves the mystery symbols. Once randomly triggered, this feature grants at least 3 fully covered mystery symbol reels. After the spin is done, these mystery symbols reveal one matching symbol. 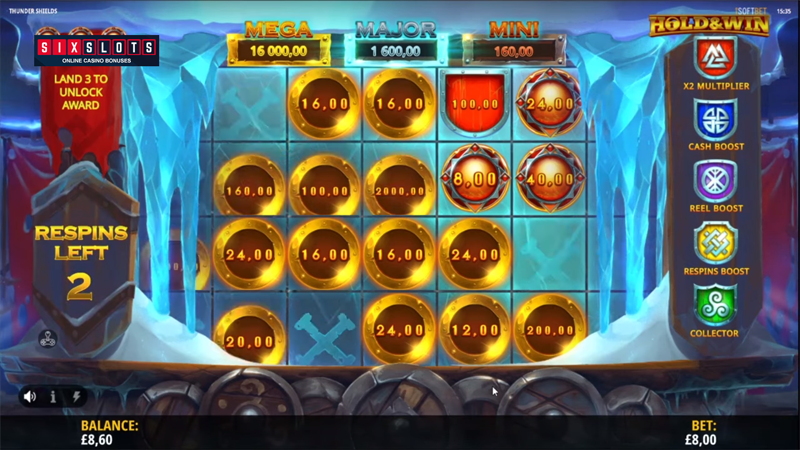 The moment that defines the series, the Hold & Win feature. Cash Shields, which are the money symbols of Thunder Shields, occasionally land across the reels throughout the game. To trigger the feature, you need to land 6 or more of these Cash Shields at once. You will start with 3 spins, while the already acquired shields will stay in place. For every new shield, the spin amount resets back to 3. You probably see where this is going, as a lot of you might have played games from Pragmatic, that made a couple of slots in the same fashion. But that’s not all of it, as Thunder Shields offer special boosters which work as modifiers. These are X2 Multiplier, Cash Boost, Reel Boost, Respin Boost, and Collector. These boosters will increase the values, add reels or multiply the winnings. Besides these, landing Mini, Major or Mega jackpots will give you 10, 100x or 1000x.

Bonus features are the life vest that holds Thunder Shields above the water, as all other game elements wouldn’t be able to hold a game on their own. With features like Colossal Respins and Mystery Spins, Thunder Shields will keep the game somewhat exciting all the time. Even though the biggest payouts come from Hold & Win bonus, still this slot makes the main game meaningful, as opposed to just blatantly grinding for the main prize. Visual effects were decent, but they didn’t impress too much, for example, the background doesn’t have defined look or idea, it’s sort of plain and unoriginal. Thunder Shields is not the strongest release from iSoftBet, but it’s still not a bad game, just the execution was slightly off.