There haven’t been many good Indian/Hindu themed slots on the offer, even more so, there haven’t been many Indian slots period. That is why we welcome the Path of Destiny with a lot of excitement in our hearts, as Red Tiger isn’t the provider that produces a lot of flops. Godly figure Ganesha takes the main stage on this slot. In the Hindu pantheon, this is the most worshipped deity. Ganesha is easily identified by the elephant’s head. This god is a patron of sciences, arts and wisdom in general. From one perspective, it’s quite interesting how we have these kinds of slots like Path of Destiny, which straight-up portray a specific religion, but there are no slots about Jesus and Christianity.

Philosophy aside, Path of Destiny straight away gives out a flashy appearance, quite similar to what we expect from Chinese themed slots. Red Tiger haven’t really pushed the math model too far, as max win potential is a bit on the low side. If you’re a fan of eastern culture, then Path of Destiny will have your attention straight away. Let’s see where the path truly takes us.

Path of Destiny is like a small trip into a different culture. Although simple, this slot is quite beautiful, as Hindu style ornaments are especially pretty. Everything else around is wholly static, so the game tends to get stale pretty quickly. Path of Destiny visual presentation brings in mixed feelings, as it feels like a little extra effort would do this slot great justice. 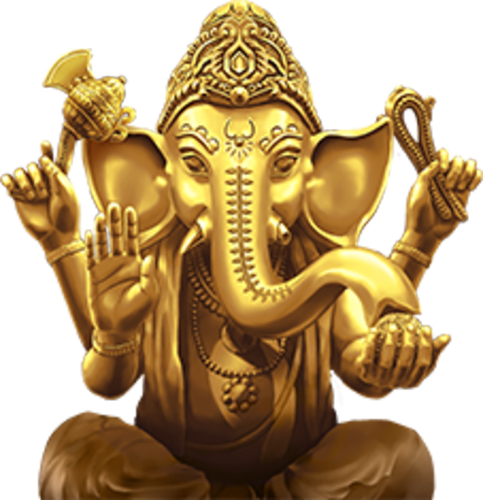 There are plenty of different symbols in Path of Destiny, but the most notable one surely is the Ganesha. This god has equipped the Parashu axe and Pasha noose in both hands. Naturally, Ganesha also serves as the special mystery symbol, which is also called the Ganesha Coin. To keep things classy, Path of Destiny has assigned royals as low paying symbols. On the contrary, high paying symbols are different elements of Hindu culture, like masks and statues. In total there are 9 regular symbols on Path of Destiny.

Red Tiger slot lineup consists of some serious payout heavy hitters, unfortunately, Path of Destiny won’t join that club as the max win potential is 1380x. Sure, it is not a bad win to have, not at all, but compared to some modern standards, especially the kinds of Megaways, Path of Destiny whimpers in the shadows. Keeping the tone a bit pessimistic, the RTP is pretty low as well, on average it’s 94.79%. The RTP can change depending on the casino, so technically it is possible for it to be close to that 96% mark. Path of Destiny volatility is medium-high, but the hit rate is very low, so again, these payout stats don’t provide a lot of excitement.

Things have gone pretty negative, so let’s hope that Path of Destiny bonus features can make a difference. We briefly mentioned the Ganesha Coin, but we didn’t get into its core function. These coins usually come in a bunch and when landed, they reveal a single type of symbol. These sort of mystery symbols are not too uncommon, so this isn’t necessarily a revolutionary feature, but we appreciate it anyway.

If you truly wish to compete for that max win, then your best bet would be the Lucky Spins feature. This Path of Destiny feature is triggered 3 bonus symbols which spell ‘’lucky spins’’. You will always start with 10 Free Spins, but there is a chance to increase this number by landing additional bonus symbols on reel 1 and 5. With this Path of Destiny feature comes special 3x3 Ganesha Mega Coins. They only appear on the middle reels. Once these land, they split up into many smaller Ganesha Coins. And that’s pretty much it when it comes down to Path of Destiny bonus features, very simple and effective. 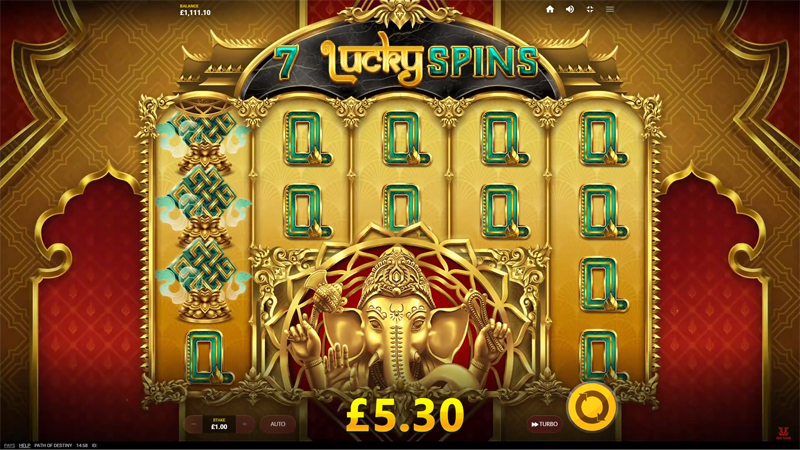 A huge positive from our side is the theme. We are so glad not to see another Ancient Egyptian or Lucky Irish slot. This Indian/Hindu theme is quite beautiful, but we believe that it could have been explored even more. The Path of Destiny payouts do provide some mixed feelings as there is a good potential to win, but it feels that you’re constantly held back by rest of the stats. You do have to wonder if Path of Destiny was made just to please a small range player base, because as a slot on its own, it doesn’t strike you with a lot of excitement.

Discover the myth of Gigantomachy and witness a fight between Olympians and Giants. Time to score that 4,000x win!