Play for money at Karamba

The great monument – The Golden Tomb of Osiris has been discovered. Step further into the tomb and discover the treasures of the god Osiris. It is said that Osiris can turn light into gold with a single gaze, hence the name of the slot is Golden Osiris. Play’n GO are no strangers to the Egyptian theme, they brought us the renowned Book of Dead, so if anyone can do it, then it’s these guys. It may be a familiar theme but the game is a far cry from being regular, as this slot implements the Cluster pays. Grid slots have been a Play’n GO speciality as of late.

Golden Osiris is a grid slot, that uses a 7x7 game layout. Usually, we tend to bash the mainstream Egyptian slots, but Golden Osiris seems to offer an exciting bundle of features and mechanisms, so it will be interesting to see if Golden Osiris can live up to that initial hype. The main prize of 12,000x is equally appealing, not every day you can see such payouts from Play’n GO. The splash screen welcomes us with a huge display of the logo and, presumably, an old and wise man saying words “Golden Osiris”. The music provides theatrical, almost opera-type of a soundtrack. The dramatic masterpiece lowly plays in the background, it blends in with the game very well. We seem to be already inside the tomb, as we can see some treasures and statues scattered across the sandy floor. Golden Osiris is a grid slot, which means that traditional paylines are replaced with the Cluster Pays. This also means that all the winning symbols disappear, while the empty spots get filled up with new ones. 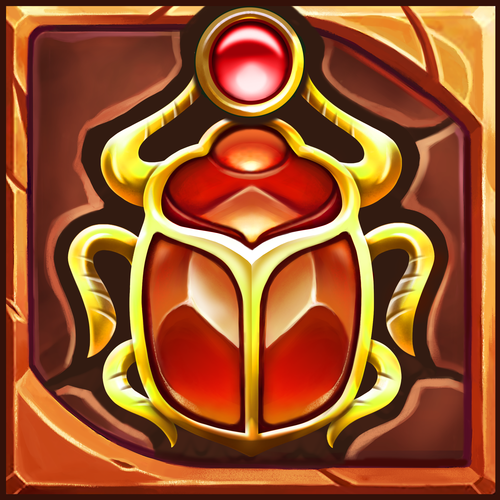 The difference between the lowest and highest Golden Osiris symbol is quite a big one. In total there are 9 regular symbols plus the scatter and wild. Lowest four are differently coloured gemstones while five of the rest portray different elements of the culture. The red scarab symbol is the most valuable of them all and it pays up to 50x for the max combination. The wilds on Golden Osiris function in a slightly more different way. They are hidden under highlighted symbols and they get activated once this symbol is a part of a winning combination. These wilds can also come multipliers of 2x, 3x, 4x, 5x, 7x and 10x. Each spin comes with 6 hidden wilds.

Just like most grid slots, Golden Osiris has some fairly balanced and likeable stats. With the medium-high volatility (7/10) and cascade mechanism, you should see a fair amount of wins, even on the colder days. This is further solidified by the decent 96.27% RTP. If all the blocks fall into the right places then you could face a mighty 12,000x max payout, which is far more than Play’n GO offer on average. Golden Osiris bet range is 0.10 – 100.

The Golden Osiris Pyramid feature gets activated once the pyramid on the left side gets charged up with 25 winning symbols, including wilds. The feature then picks one random symbol. All available symbols of this sort will then convert up to 4 adjacent symbols into the same symbol type. It’s also possible to retrigger this pyramid. Each retrigger applies a 3x multiplier. This multiplier is capped at 30x.

Golden Osiris Free Spins are granted for 3 scatter symbols. Starting spin amount is 5, which seems awfully low, but the previously mentioned Pyramids start fully charged, so wins on every spin are almost guaranteed. To make things even more rewarding, only the five high paying symbols convert and expand. More Free Spins can be acquired by landing additional scatters, which appear on the reels quite regularly. 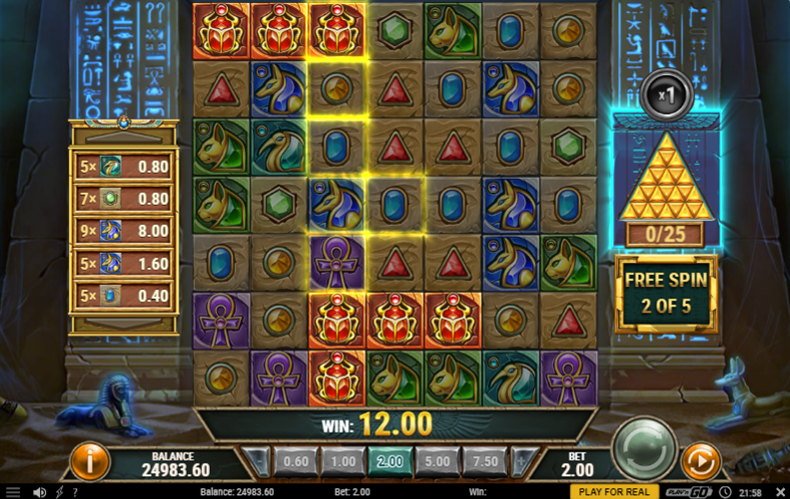 Last but not least, Golden Osiris offers a Second Chance: Scatter Explosion. The name of the feature is very literal as after landing 2 scatters, symbols around them explode, giving you a chance to land a third scatter in the empty spots. This feature is available only during the main game. 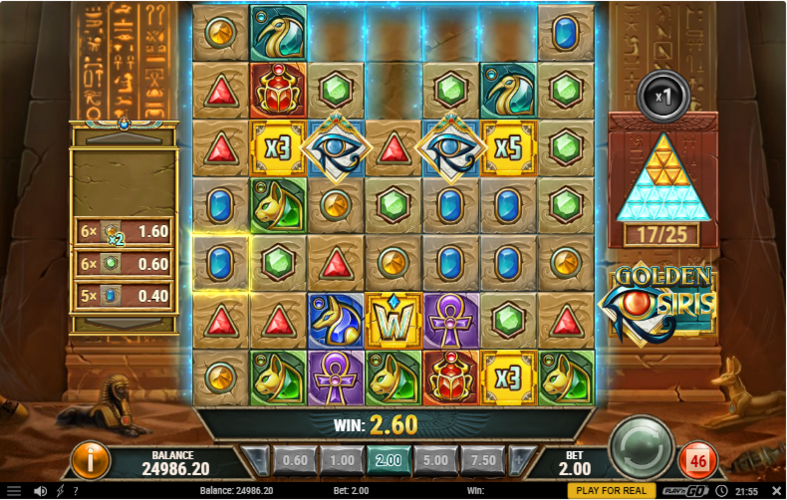 Egyptian theme fans can rejoice, it seems like Play’n GO have produced another stellar slot, that is polished and refined on all fronts. Golden Osiris wonderfully captures the Egyptian feel, the slot is very attractive. The grid format and all the bonus features provide a constant action, so Golden Osiris will be entertaining for a fairly long time. And to top it all off, Golden Osiris has some just payout stats and a mighty max payout of 12,000x. We are looking at a very complete slot, without no serious flaws.