Red Tiger have prepared another voyage to the seas, welcome to the second pirate instalment – Pirates’ Plenty Battle for Gold. This time Captain Blackbeard is a mortal man, opposed to the undead version that we saw before. We once again need to set sails with the crew in our quest for the lost treasure. The return of 5000x max payout is a good reason for some carousing, so find your bottle of rum and let’s get to it.

Pirates’ Plenty Battle of Gold has kept a lot of things that were offered on the previous version, although this time, the focus is more on the naval battles, so keep your broadside cannons in check. Pirates’ Plenty Battle of Gold is as vibrant and action-filled as the last game, perhaps even more, so if you were a fan of the original slot, then the sequel should be a slot just for you. Let’s not keep the crew waiting, load up the anchor and away we go.

The major change to the game layout is the locked row, or as it is known here – Wild Island Row. Pirates Plenty Battle for Gold game begins with the regular 5x3 layout, the same way it was on the previous version, but this time it is the additional 4th row that is locked instead of the 6th reel. Same way as before, you need to collect Map symbols and navigate the map to unlock it. Once unlocked, the new layout stays with you for all the future spins, at least on the specific bet that is.

Speaking of changes, the Pirates Plenty Battle for Gold background design has none. It’s the same Captain’s cabin with the same treasures around. There is around 6 month difference between these games, so it’s way too early to say that this brings back some sort of a feeling of nostalgia. It would have been nice if Red Tiger did some adjustments to the main game screen, but only changes we see are the ones during the bonus game. Of course on the grand scale, this is a minor problem. Red Tiger also have decided to stick with the previous symbols. Low symbols are golden coins, which feature engravements of playing card suits. A tier above we have picture symbols like pistols, cannon and pirate hat. The most valuable symbol is one of Jolly Roger’s skull. Once again, the same symbols were seen in the previous game, so a good portion of players should find these close to home.

If you were fine with the payouts before, then you should have no problems with payouts of Pirates Plenty Battle for Gold. Total paylines go from 20 up to 30 due to possible row addition. Volatility is high as ever and so is the hit rate, just as a pirate adventure should be. Perhaps with a little disappointment comes the max win of 5,000x. Don’t get it twisted, it is more than solid potential, but for a sequel you just want to see a slightly bigger number, maybe on the next one. 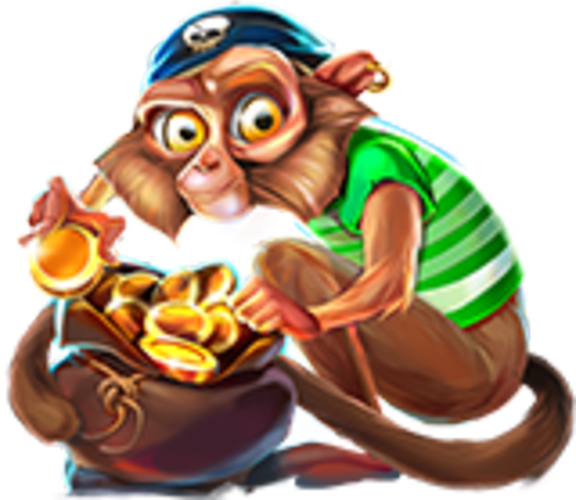 A familiar face on the crew deck is the Wild Monkey. This little fellow also makes an appearance on Pirates Plenty Battle for Gold. You need to keep an eye out for him, as his help can bring you some extra wins. Wild Monkey can randomly appear on a base game spin, stealing low symbols and replacing them with wilds, also triggering a respin with only high symbols present. We already mentioned the Wild Island Row, but we didn’t talk about the additional benefits that it brings. When unlocked this feature floods into game extra wilds that come with multipliers, increasing your chances nicely. 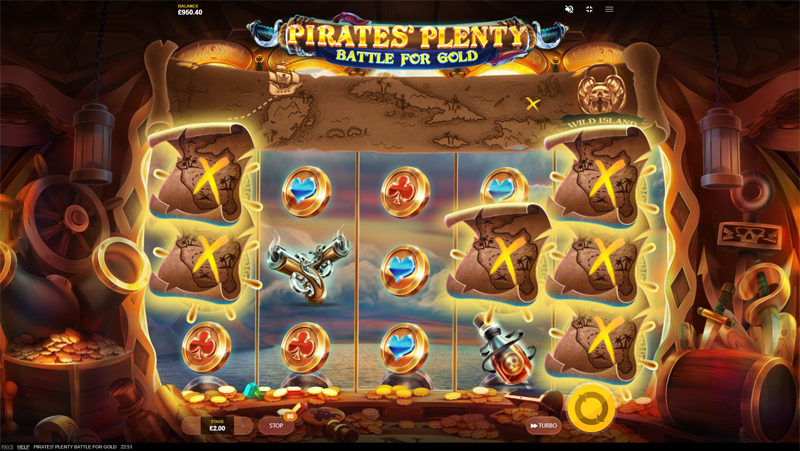 The most important feature to score on Pirates Plenty Battle for Gold is the Battle Spins. Triggered by three Battle Spins symbols, this bonus feature is all about the naval battle, that pirates are so known for. You start off with a random number of Free Spins. Special to bonus game is the Fire! Symbols. When these appear you can get either wilds or more free spins. Also, the wilds you get become sticky. Exclusive to the bonus game is the Fire Away! feature. Captain Blackbeard can randomly throw in some Wild bombs, that are converted to wild symbols. As you can see, the support is not too bad, so scoring good wins shouldn’t be too hard of a task to do. 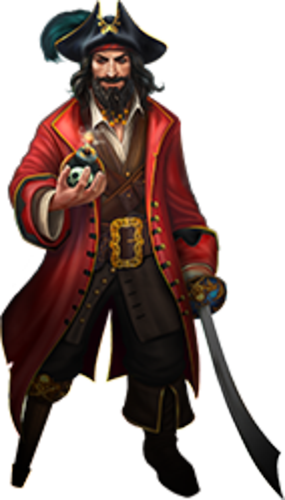