We’ve had our fair share of Bonanza type slots in the past, most notably the one from Big Time Gaming, which still is a hot pick these days, but times go by and new kings need to be crowned, so Pragmatic Play are stepping up to the occasion and introducing us to the Gems Bonanza slot. This 8 by 8 slot provides 64 symbols, each ready to explode and award you handsomely.

Living up to the name, Gems Bonanza slot truly has the potential to suddenly make a lot of money, as the max payout is stunning 10,000x. These cluster slots lately have been getting more and more volatile with bigger rewards and opportunities. This trend has been especially noticeable on the newer Pragmatic Play games, as they the general payout amount has seen an upwards rise, but for now, let’s get into the world of Gems Bonanza. For a lot of us, the Bonanza associates with the American gold rush, probably thanks to the BTG’s influence, but Gems Bonanza is taking a step deeper to south, to the ancient lands of Aztec civilization. We seem to be somewhere around the ancient temple, where Aztec styled steps, ornaments and even a gold furnace is seen. Background music consists of a light Aztec styled tune that gets louder and more intense when the action picks up. Gems Bonanza presents a good setting, nothing too spectacular, but nice to see nonetheless.

Gems Bonanza symbols are what you would expect, differently coloured and shaped gemstones. They are shiny and beautiful and probably would fetch a good price on the real market. As said before, the larger 8x8 Gems Bonanza game layout ensures 64 symbols on every game spin, this should make up for some interesting and unique combinations, no two Gems Bonanza sessions will be the same. The cluster pays, which is also know as tumble mechanism destroy all symbols which are a part of a winning combination, dropping new ones from up above afterwards, almost like Tetris.

Perhaps the juiciest news is the Gems Bonanza payouts. Now in general, these type of Cluster games don’t come with small potentials, so Gems Bonanza stays true to the tendency with a gorgeous 10,000x multiplier payout. Of course, the stars need to line up for you perfectly for this kind of win to happen, but still, the chance is there. Gems Bonanza comes with a very decent RTP of 96.51%, that is just slightly above the average. Big wins come with high volatility, so the action can be particularly unexpectable. Before anything, you must understand how wins on Gems Bonanza are made. The answer is 5, as that is the minimum of symbols required to make a successful winning combination.

Your eyes are not deceiving you, there are 5 bonus features on Gems Bonanza. Well….sort of, as it is debatable if each of them should be counted as a standalone feature, but for now, we will leave it as it is. This style of bonus progression is similar to the one historically used by Play’n GO games. Any wins you score, move the golden progression bar by a certain amount, the more symbols are involved the bigger the progression. In total, you need to collect 114 Gems Bonanza symbols, before triggering the Gold Fever Bonus. 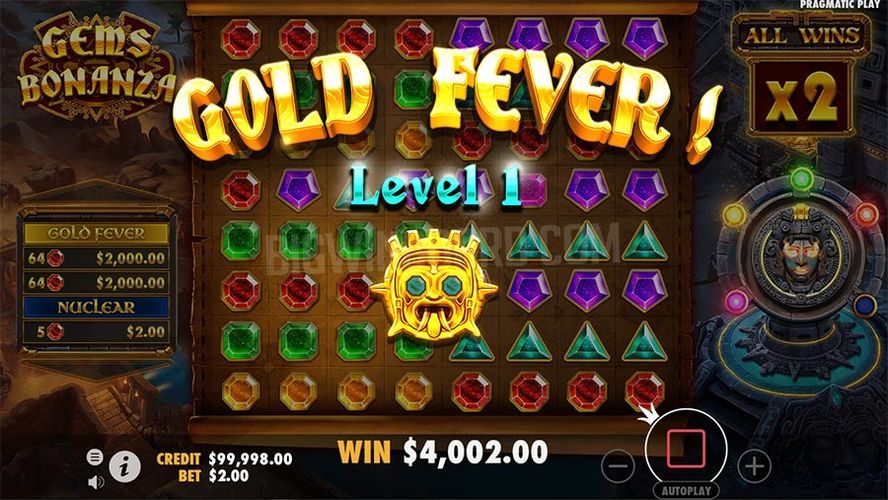 Gems Bonanza can be compared to games like Reactoonz where there are additional rewards you can get during the quest to Gold Fever. These modifiers are represented by different colours and are activated by landing wins that are located on the colourful lights behind the symbols. The blue stone is the Nuclear feature which completely clears the layout of all symbols, replacing them with new ones. Next Gems Bonanza stone is the pink one, which selects one type of symbol and turns all instances of it into wild symbols. Red stone grants Colossal symbols which can come in sizes of 3x3 to 5x5. Yellow stone drops in 2x2 symbols in random game positions. Finally, the green stone adds 5-15 wilds in random positions.

With the help of these stone modifiers, you should be able to reach the Gold Fever Bonus. This Gems Bonanza bonus comes with 5 levels. The first level starts with 2x multiplier. You have all 5 stones at your disposal, with their help, you need to make another gold bar progression for the next level to be triggered. Every level increases the multiplier by two, so the final level 5 comes with a 10x multiplier. If you play your cards right, Gems Bonanza bonus can be highly rewarding.

It’s quite obvious that Gems Bonanza is going to have a fairly big approval, it’s fun, it’s rewarding and good looking, everything you would expect from a solid slot. Gems Bonanza’s recipe isn’t revolutionary though, as we’ve seen plenty of slots as this from Play’n GO and Big Time Gaming, but still, credit where credit is due, Gems Bonanza will provide plenty of entertainment for the time to come. The cherry on the top is the big 10,000x max payout, that will attract a fair share of fortune hunters.

Blockbuster Squid Game is now available in a form of a video slot. Beat the competition and win the big piggy bank.