Video slot powerhouses Red Tiger and NetEnt have joined forces to create an exciting remastered Piggy Riches Megaways. If you’ve been around for a while, then you’ve surely heard of NetEnt’s original Piggy Riches. Believe it or not, a whole decade has passed already, which probably makes some of you feel old, but don’t worry, this nostalgic trip will set you right back on the track.

As part of the deal between NetEnt and Red Tiger came the Megaways license, which nicely comes to fruition in their Piggy Riches Megaways project. Besides the obvious game layout change, that comes with it, the Piggy Riches Megaway slot completely redesigns all the outdated visuals. It’s going to be a tough task to usurp the crown from such a classic slot, but Piggy Riches Megaways got all the tools for it. Let’s get filthy rich! 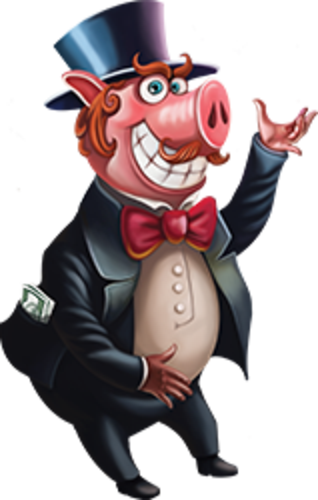 The previous version came out about a decade ago and looking back at it, we are surprised how well it still looks to this date. For many, the original Piggy Riches is still on their playlist, so that makes you wonder, was the Megaways version really necessary? We would like to think that it was, as the new Piggy Riches Megaways revives the cult classic with beautiful visuals and audio effects. The biggest difference between these two is the game layout. Megaways adds an extra reel and stretches rows up to 7. Megaways have a lot of fans in general, so adding them to Piggy Riches does seem like a good move.

Speaking of remastered visuals, the symbols have barely been changed. They look the same, only the quality and colours have been improved. This is not a bad thing, as Piggy Riches original symbols are well design, so a little quality boost is just what they were lacking. Piggy Riches Megaways features such symbols as the Piggy Bank, Purse, Car Keys, Golden Card and the newly added Treasure Bag, which is also the highest paying symbol. Not to forget, the slot also comes with the dashing low paying card symbols.

Megaways ensures up to 117,649 paylines, that’s about 117,634 lines more than on the predecessor. You can’t make a slot about luxury life and have a small payout, that is why Piggy Riches Megaways comes with a mega max win, a potential of over 10,000x, now that’s rich! No surprise, that slot such as this comes with high volatility. Hit Rate is also rated 5/5 by Red Tiger. The cascading function will help to add some additional wins as well. For those who don’t know, cascading function destroys all the symbols that were a part of a winning combination, replacing them with new ones. This gives a chance to create a long chain of wins, just from a single bet.

Mr.Piggy is a generous man...or a pig because he appears in a form of Mega Wilds. It’s pretty much all in the name, Mega Wilds are huge Wild symbols that cover the entire reel. There is a possibility to land up to 3 Mega Wilds on a single spin. These Wilds can also have a multiplier on them, that goes up to 7x. Mr.Piggy had the same role on the previous game, but on Piggy Riches Megaways his wilds are massively improved.

Piggy Riches Megaways bonus Free Spins can be super rewarding. To get these, you need to land 3 scatters symbols, which again are portrayed by Mrs.Piggy. Bonus starts with a wheel spin, which determinates how many spins you will start off with and how big the starting multiplier is going to be. The inner segment stops first, giving you a certain amount of spins. It could be 7, 10 or even 22, all that depends on your luck. The outer segment steps afterwards, presenting you with a starting multiplier. We say starting because, for every win/cascade you make, the game adds +1 multiplier. Each newly landed scatter adds another spin to the collection. Combining these factors, it is obvious that Piggy Riches Megaways can go bonkers. 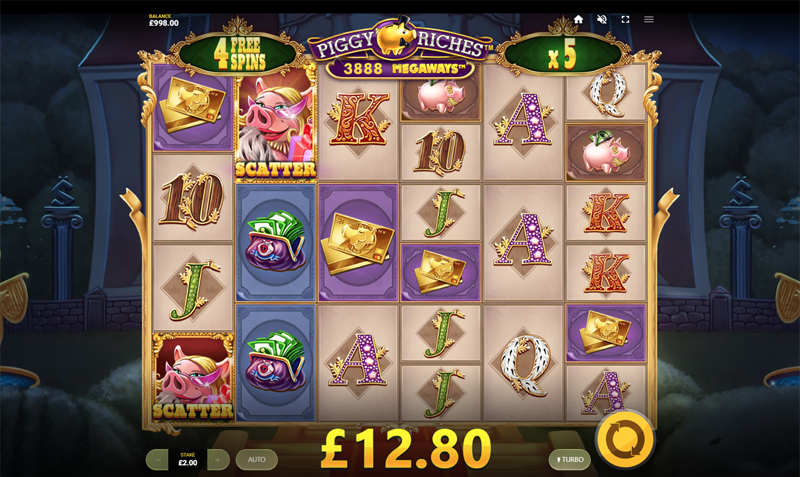 Red Tiger and NetEnt can feel proud about their Piggy Riches Megaways remaster. This slot reinvents the classical Piggy Riches in a very positive light. The visuals and gameplay feel so familiar and nostalgic, but also very new at the same time. Rarely an addition of Megaways is a bad thing, so we shouldn’t be too surprised by the success, that Piggy Riches Megaways has acclaimed. We would love to see more old-school titles remade in a similar fashion.

Just For The Win wants to bring us to the green Irish hills where life is simple and merry. Emerald Gold is capable of paying out 25,000x.

Things are just much cooler down in Antarctica and we’re not talking about the temperature. Meet the lovely penguin family.