Anubis – god of death and underworld, this alone can strike terror and respect in the hearts of many. His vault is now discovered, do you dare to open it? Red Tiger has a good experience with Cluster Pays and Egyptian themed slots, but the Vault of Anubis is the first slot that combines both. It makes up for some exciting times, but also the expectations rise with it.

With an impressive 5000x max payout, Vault of Anubis can turn some heads. The idea of an old vault is an appealing proposition for treasure hunters. High volatility and hit rate can together make some godly wins, especially with the help of Cluster Pays mechanism. The moment is here to see what Vault of Anubis hides inside.

As the ancient tales go, Anubis holds control of everything related to death, so, unsurprisingly, the Vault of Anubis slot presents a grimmer and menacing tone. Jackal headed deity is seen in forms of statues and symbols. You can feel his imperiling presence all around. Vault of Anubis uses the Cluster Pays Mechanism, which removes the traditional form of paylines. After a successful combination, every winning symbol destroys itself, and new symbols drop from above, providing possible consecutive wins with a single bet. 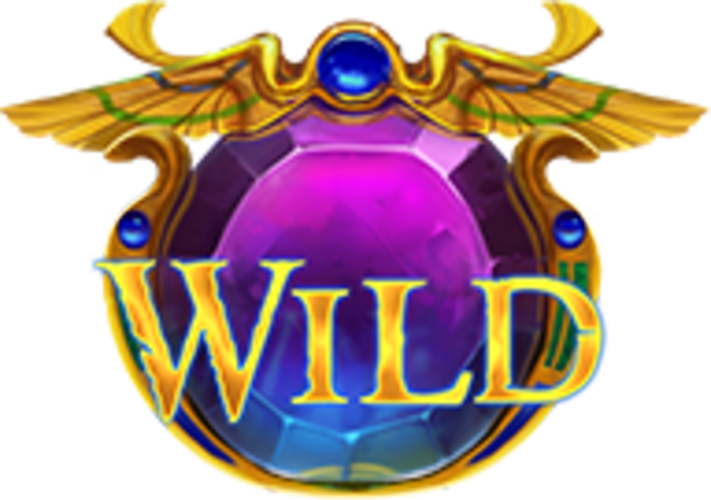 Symbols on the Vault of Anubis are quite simple. They are very basic and not graphically complex. It may sound very harsh, but that’s commonly a case on games that use the Cluster Pays. As the game layout is bigger, small details are less important, so not a big minus for this. There are nine regular symbols in total, plus the Wild. Vault of Anubis most valuable symbol is the head of Anubis, which pays 750x for a Cluster combination of 30+ symbols. That’s a one though combo to land, but the multiplier is pretty sweet.

To make any winning combination on Vault of Anubis, you need to land 5 or more symbols of the same sort. Matching can be made only horizontally and vertically. Theoretically, there are no limits on how many winning combos you can land on a single bet. The betting range is 0.20 - 100, by the way. Red Tiger has stated that the volatility setting and the slot hit rate is very high. It can make the Vault of Anubis slot very explosive, as big wins can pop out ‘’almost from nowhere’’. For a Red Tiger game, the RTP of 95.74% is as expected as rain in autumn - they don’t seem to be too keen on going over 96%.

Although not too impressive by looks, the high paying symbols can impress by the function they serve. Super Symbols is the name of this Vault of Anubis bonus feature. High paying symbols, like the Scarab Beetle, Scepter, Eye of Horus, and the Anubis himself, can appear as Super Symbols, taking up a 2x2 or 3x3 grid space. 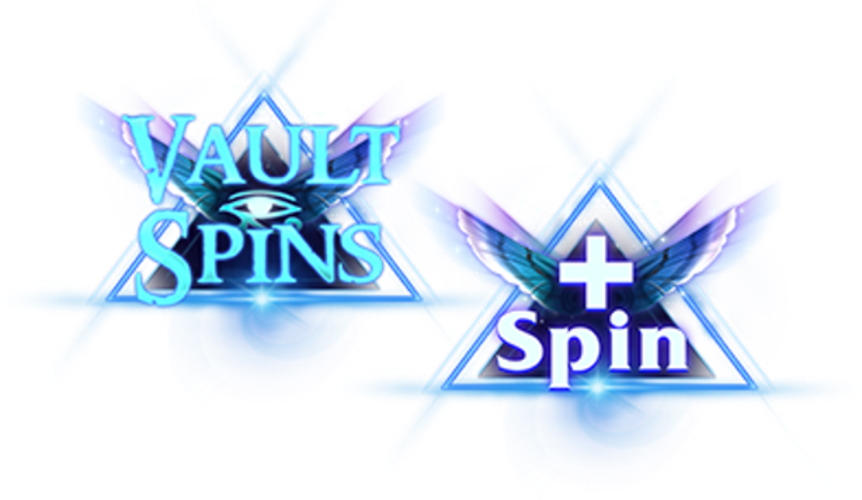 The best feature to score on Vault of Anubis is the Vault Spins. Symbol of Vault Spins works as a scatter, and the player needs to get four of them to trigger the bonus. It’s almost impossible to score them all at once, so you need to collect four with the help of Cluster Pays. These Vault Spins symbols are collected per bet, so if you manage to get only three with the help of cascade, then the counter still drops to zero on the next bet. Vault of Anubis Vault Spins award 10 Free Spins. There is also a chance to extend the bonus feature by landing a unique Plus Spin symbol. For every cascade or cluster that the player does, the total multiplier increases by one. In theory, these multipliers are unlimited. 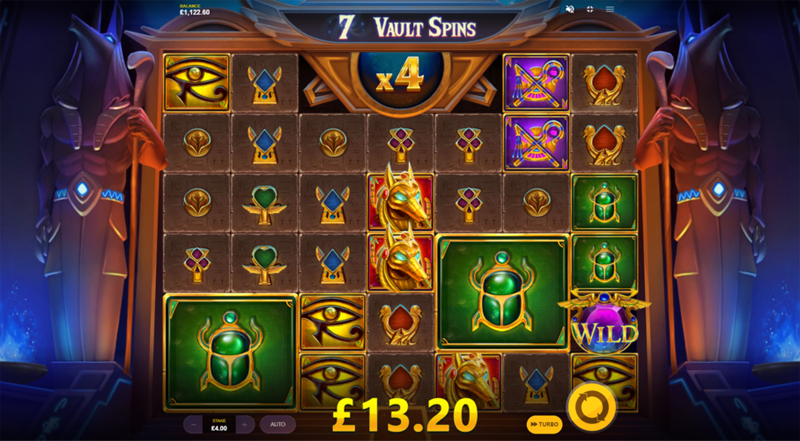 Don’t be too blinded by the impressive over 5000x Vault of Anubis max payout, because this road isn’t pawed in gold. Vault of Anubis is highly volatile, so quite often you will find yourself grinding long hours before scoring a significant win. But when it happens, that time will be well spent. Design-wise, you have to give credit to Vault of Anubis, it sets the proper mood. Some of the symbols were visually underwhelming, but we will cut some slack due to this being a large layout Cluster slot. Overall, Vault of Anubis is a solid game from Red Tiger, it may not go down as a classic, but it still will win over some hearts for sure.