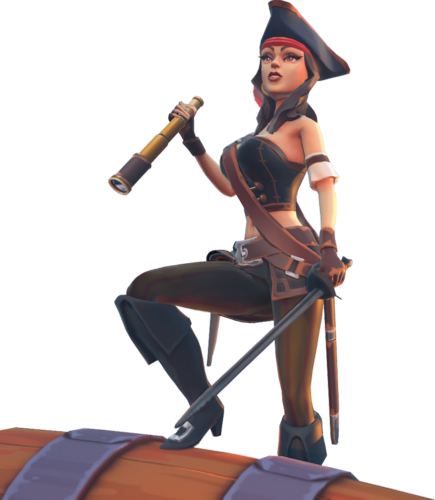 Evoplay Entertainment has lately impressed with the quality of graphics on its new slots. Sea of Spins is using next-generation 3D visual effects and animations, this might be one of the most immersive slot experiences from this provider.

Sea of Spins action is set amid the Caribbean Sea, where the golden age of piracy took place. Our Captain Lady Fortuna wants to claim her territory, but there are other Captains that are looking to do the same.  These will be some tough ship battles, but if you are victorious, then the plunder surely will be yours to claim.

The visual presentation is the aspect where Evoplay has shone brightly. Sea of Spins is a full 3D video slot, with some impressive animations. It uses a 5 x 4 game layout, but instead of spinning, symbols drown and ascend between bets. It is a step in a different direction, comparing to the regular slots. 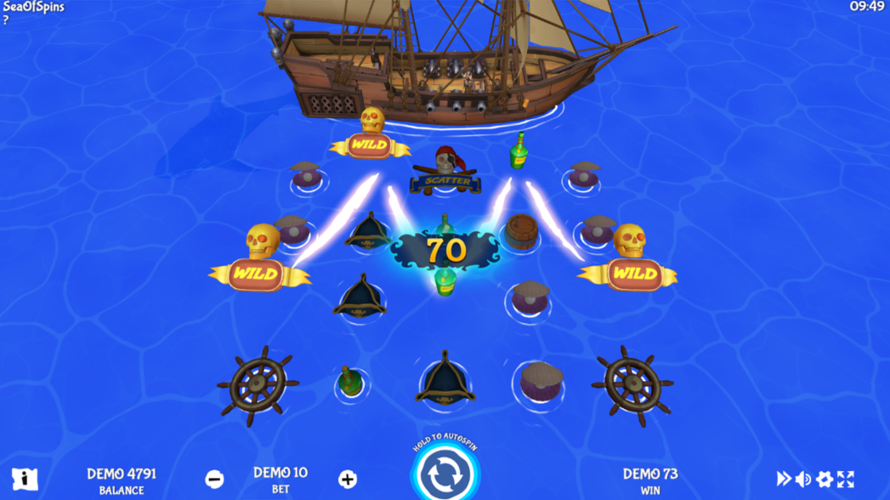 The action takes place in the middle of the sea. Ship of Captain Lady Fortuna overlooks the main playing field. Everything around is animated and moving - you can see that Evoplay put in some time into creating the Sea of Spins slot.

All Sea of Spins symbols float above the water - they submerge and rise as the spins go by. In total, there are 9 symbols, including the Wild symbol.  Every symbol has a different value, but they all share the pirate theme, for example, we have a compass, powder barrel, pirate’s hat, ship’s wheel, etc. Both Wild and Scatter are considered special symbols, and both use a skull as the design.

This is the part where the slot struggles a bit – the hit rate can be a bit rough at some points. Max payout of 2450x technically is not too bad, but that’s the absolute ceiling, and, as we know, it is very hard to utilize the max potential on slots. Volatility, as you would expect, is medium, which is quite traditional for slots that focus more on entertainment and visuals opposed to just being high roller heaven. 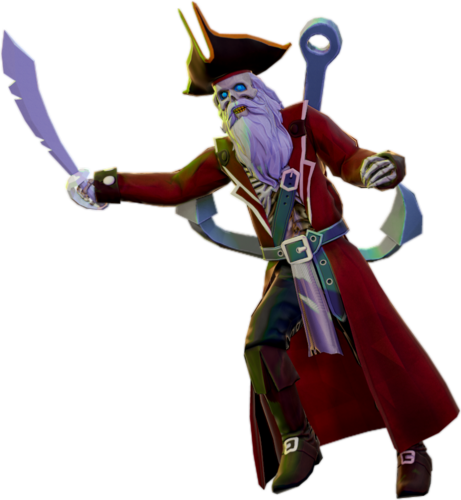 There are three other Captains on Sea of Spins that stand in the way of your glory hunt. Although highly dangerous, they won’t always attack you on sight. These Captains, together with their ships, may appear as Random Events. When this happens, a special feature is activated, the type of it depends on which Captain you encounter. Morgan the Undead replaces 4 random symbols with Wilds, while Samuel Soring replaces all barrel symbols with Wilds, and John Sticky re-spins your reels with all the Wilds you had before becoming sticky until the next spin.

It seems that peace is not always the option, as by landing 3 Sea of Spins Scatter symbols you are thrown into a vicious ship battle. Your opponent will be randomly decided from the three previously mentioned Captains. Just like in Random Events, also on Free Spins, each Captain adds their unique feature to each spin on the bonus game. 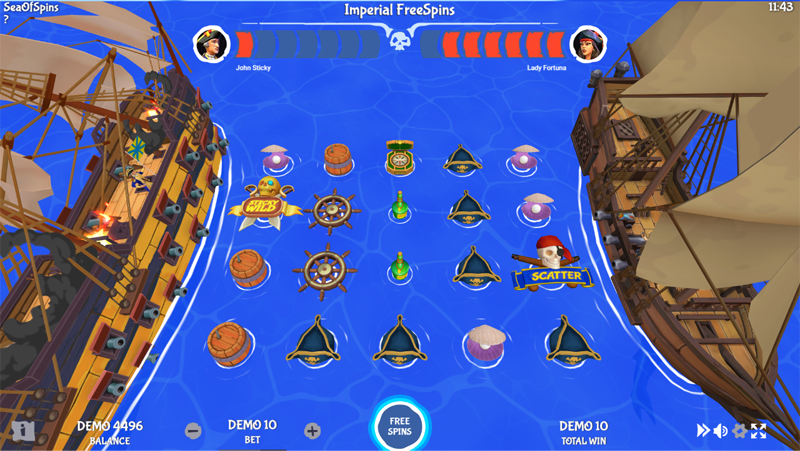 Sea of Spins Free Spins begin with your and the enemy’s ship facing each other. Both ships have seven health points. The main objective is to take down the enemy ship before it destroys you. Every scatter you land during the Free Spins takes away a point of health from the opponent. If your spin comes with no scatter, then the opposing ship fires the cannons on you and takes away a health point. If you’re victorious, a choice of three chests will be presented. Each chest holds a random multiplier that is applied to your final winnings.

With all the graphical effects and animations, Sea of Spins really feels like a next-generation slot. When it comes down to the overall presentation, we don’t think there are any flaws to point out. But if there is something negative to take away from all this, then it might be the hit rate and the difficulty of scoring big wins often. But at the end of the day, all the results depend on your luck, so perhaps you will be the one that finds the glorious treasure with ease.