When you think of the mighty Roman Empire, you think of Caesar – emperor whose name will be spoken of as long as men have tongues. With no surprise, Ancient Roman-themed slots also are a hot take in the market, so this time we will be taking a look at Playson's presentation of Rome: Caesar's Glory.

Just like the heat of the battle, also here on Rome: Caesar's Glory action is fierce. Games pyramid-shaped layout stands firm in front like a trebuchet of war. With high volatility and a strong max payout of 1700x, Rome: Caesar's Glory has a high chance to attract many new fighters to stand under the SPQR flag.

We are in midst of a battle – formations are visible behind the layout, encouraging music plays in the background; it is you versus the reels. Cinematics aside though, Rome: Caesar's Glory is a very appealing slot, it's intense, but not overly much. Fiery golden sunset would be the best way to describe the general look of the game.

Probably the attention grabber is the way that the Rome: Caesar's Glory is played out. It's a 6 Reel pyramid row-based layout with fixed 64 paylines. Opinions regarding this are very 50/50. Some love the way it works, but some prefer it to have a classic layout. The way it is executed on Rome: Caesar's Glory is quite spot on. The game doesn't feel clunky or awkward as it sometimes is on slots that use a similar format. 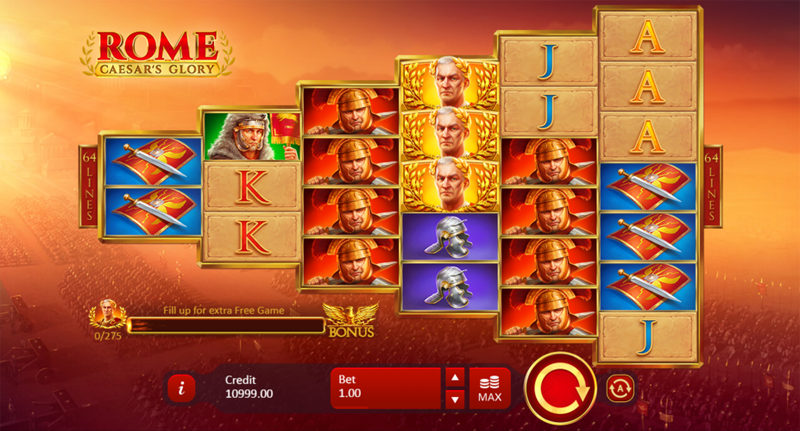 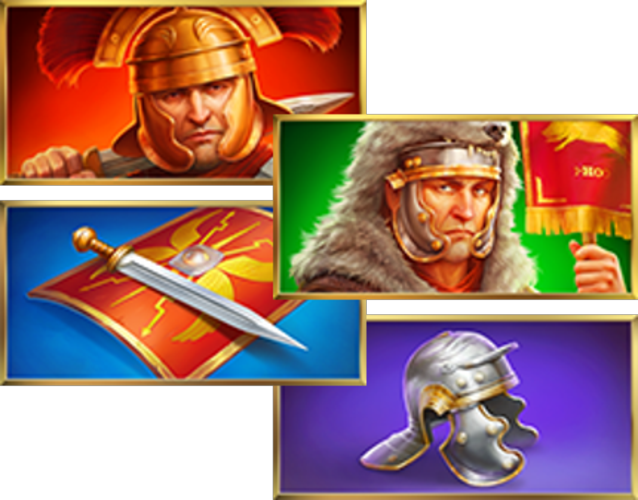 From the regular symbols, the best one is the Roman Centurion, which pays max 15x. Next up, we have the Roman Standart Bearer, who iconically is wearing the wolf's helmet, value for it is 10x max. Already smaller symbols are the ones of a shield and a helmet, from those, follow the classical royals of A, K, Q, J, which didn't get a special theme treatment, unfortunately.

As the emperor, Caeser is entitled to represent the Wild symbol. Lastly, a Scatter symbol on Rome: Caesar's Glory is the Roman Eagle, that we see on the flag of empire and many other places.

If you want to use such a mighty theme for your slot, then the payout stats also should match the intensity and Rome: Caesar's Glory is doing just that. It's high volatility and above-average RTP game, with fixed 64 win lines, this comes as a result of the pyramid layout. Bet range, as on almost every Playson slot, is 0.20 – 100EUR. All in all, there aren't any real negatives to draw from these stats, they aren't perhaps the best we've seen, but they are doing the job properly.

Glorious plunders of the war, the fruits of victory, we're of course talking about all the bonus features on Rome: Caesar's Glory.

We will start with the most standard of the bonuses, the Free Spins. This feature is triggered by landing 3 or more Scatter symbols. The reward for 3 scatters is 8 free spins, 12 for 4, and 16 for 5 scatters. Also, all of the reels flip into the other direction during the Free Spins, so it is easier to make additional combinations. You can score a retrigger, but the Free Spins round limit is 70.

The next feature that is unique to Free Spins is the Expanding Wilds. Any Caesar Wilds expand to cover the whole reel. It is an addition to make Free Spins even more desirable. 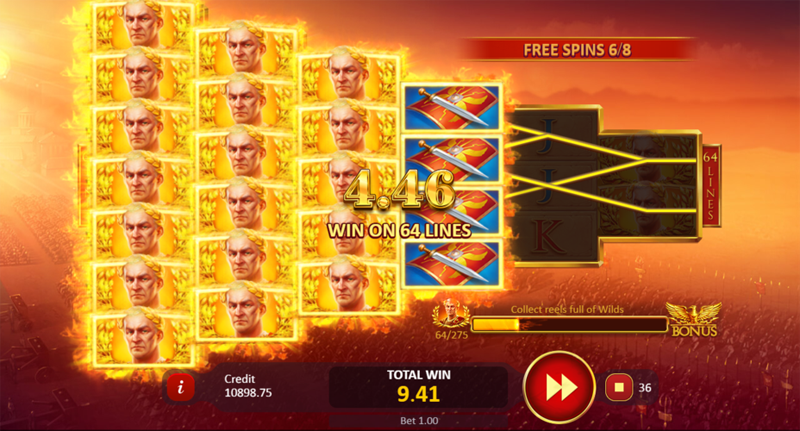 You probably already noticed the flaming progress bar that is visible below Rome: Caesar's Glory game layout. It keeps track of how far you are from the Bonus Free Spins. In a general sense, they work the same way the regular Free Spins do, just that the way to acquire them is a whole lot different.

In the main game, you need to collect 275 full reel Wilds, to activate this feature. Also, the number of Free Spins is randomly determined – it could be 8, 12, or 16. Very interesting is the fact that progress for this feature is not stored separately for each bet, as it is usually. But to make it fair, spin value for the Bonus Free Spins is calculated from your average bet.

Rome: Caesar's Glory is a well-crafted slot that captures the vigor of the Roman Legion. It's visually alluring and pleasing. In their core, the bonus features are rather simple, but they aren't boring. Full reels of flaming Wilds are a sight that never gets too old. Fans of the Roman Empire surely will find this slot refreshing.

Check your colours, because we are about to walk in into one doggy neighbourhood. Be the top dog and get 25,000x in your pocket